Update Required To play the media you will need to either update your browser to a recent version or update your Flash plugin.
By VOA
Nov 22, 2017


The United States government and the Economic Community for West African States, or ECOWAS, have reaffirmed their commitment and collaboration to strengthen harmonization and delivery of development programs that aid millions of people throughout West Africa.

Alex Deprez, Mission Director, U.S. Agency for International Development, or USAID/West Africa and the President of ECOWAS, Marcel de Souza, recognized the multi-year Development Agreement between the two institutions at an event in Abuja, Nigeria on November 10th. 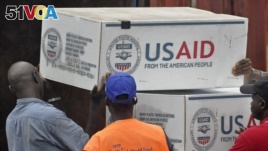 American aid goods are loaded onto a truck after it arrived by airplane, to be used in the fight against the Ebola virus spreading in the city of Monrovia, Liberia, Aug. 24, 2014.

Under this Development Agreement, the U.S. government will provide up to 298.7 million dollar over the five year-period of 2015 to 2020 in support of ECOWAS priorities, including strengthening democratic institutions; enhancing economic growth, trade and investment; advancing peace and security; and increasing opportunity and development in Sub-Saharan Africa.

The agreement also commits an additional 31.6 million dollars to the Development Agreement, of which 25.5 million dollars will support Countering Violent Extremism activities in the region.

The renewed partnership underscores the deep and longstanding cooperation between the United States government, through USAID/West Africa, and ECOWAS. Mr. Young expressed the hope that the signing of this Development Objective Agreement will help both institutions achieve their shared goals to “reduce violent extremism, reduce poverty, and improve the health and livelihoods of people across the region.”