Update Required To play the media you will need to either update your browser to a recent version or update your Flash plugin.
By VOA
Jun 2, 2018


This year marks the tenth anniversary of Russia's invasion of Georgia. “The United States unequivocally condemns Russia's occupation on Georgian soil,” said Secretary of State Mike Pompeo at a plenary session of the U.S.-Georgia Strategic Partnership.

The Secretary also emphasized that the “Russian-occupied Georgian territories of Abkhazia and South Ossetia are integral parts of Georgia” and called on Russia “to fulfill all of its obligations under the 2008 ceasefire agreement to withdraw its forces to pre-conflict positions, to reverse its recognition of the Georgian regions of Abkhazia and South Ossetia as independent states, and to provide free access for humanitarian assistance to both regions.”

Secretary Pompeo commended Georgia for being a steadfast partner of NATO, making valuable contributions to international security, and upholding Western values. Georgia is the largest non-NATO state troop contributor to Afghanistan, with Georgian troops serving shoulder to shoulder with American troops there. The U.S. recognizes and honors the 32 Georgian soldiers who have made the ultimate sacrifice in pursuit of peace and stability there. 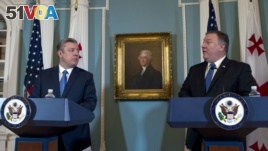 The United States and Georgia continue to deepen their security relationship, including through cooperation on counterterrorism, stemming the flow of foreign fighters crossing Georgian territory, and countering the smuggling of dangerous nuclear materials from the former Soviet Union.

The United States looks forward to one day welcoming Georgia into NATO, said Secretary Pompeo. Most recently, both countries discussed the links between national security, a vibrant economy, and strong democracy. “We know that an open society and a strong economy together are foundational elements for Georgia's security,” emphasized Mr. Pompeo. “The rule of law, combined with an independent judiciary, accountable government, and respect for pluralism are essential for democratic and economic advancement.”

Going forward, Secretary Pompeo urged Georgia to create opportunities for all voices to be heard in politics, in media, and to strengthen checks and balances within government institutions. Despite Russia's occupation of 20 percent of its territory, Georgia has continued to reform. The country's success carries with it a responsibility to fulfill the expectations of the Georgian people for economic prosperity and governmental transparency.

The United States has stood with Georgia for a quarter century, said Secretary Pompeo, and “we will continue to stand with you as partners, friends, and one day as NATO allies as well.”