Update Required To play the media you will need to either update your browser to a recent version or update your Flash plugin.
By VOA
Jan 9, 2018


The United States Department of Treasury has imposed sanctions on five entities linked to Iran's ballistic missile program. The announcement was made January 4 as anti-Iranian government demonstrations, which started in December over economic grievances but broadened to include wide-ranging political and cultural frustrations, continued. 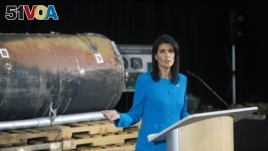 As a result of the sanctions, all property and interest in property of the designated entities subject to U.S. jurisdiction are blocked, and U.S. persons are generally prohibited from engaging in transactions with them. In addition, foreign financial institutions that knowingly facilitate significant transactions for these entities, or persons that provide material support to them, risk being blocked from the U.S. financial system.

Treasury Secretary Mnuchin said, “The United States will continue to decisively counter the Iranian regime's malign activity, including additional sanctions targeting human rights abuses. We will not hesitate to call out the regime's economic mismanagement, and diversion of significant resources to fund threatening missile systems at the expense of its citizenry.”