Update Required To play the media you will need to either update your browser to a recent version or update your Flash plugin.
By VOA
Jan 14, 2018


As the first full year of the Donald Trump Presidency winds to a close, Susan Thornton, Acting Assistant Secretary for the East Asian and Pacific Affairs took the opportunity to look back at some of the new Administration's achievements in the Indo-Pacific region. 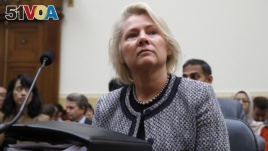 As a result, many of our allies around the globe have joined the United States in restricting or ending North Korean diplomatic activities, severing all trade ties and imposing or tightening economic sanctions on North Korea.

At the same time, we expanded our engagement with China, conducting four high-level dialogues on topics ranging from cultural ties to our economic relations, from law enforcement to cybersecurity, and from diplomacy to regional security, including the threat of North Korea.

And finally, we worked to expand our partnerships with the Pacific Islands, identifying new avenues of cooperation on regional and global challenges and emphasizing our continued commitment to the region's security, prosperity, and stability.

“As we look forward to 2018, our allies, friends and partners in the East Asia and Pacific can rest assured that the United States will continue to be fully engaged across this vitally important region.”