Update Required To play the media you will need to either update your browser to a recent version or update your Flash plugin.
By VOA
Sep 18, 2017


The U.S. and Kuwait have agreed to a number of initiatives that will deepen the ties between the two nations through a process known as the Strategic Dialogue. 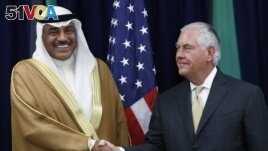 The U.S. and Kuwait signed two additional memorandums of understanding. The first is an education MOU between the Department of State and Kuwait's ministries of education and of higher education. This MOU will help prepare Kuwaiti students to study in the United States and encourages relations between U.S. and Kuwaiti institutions of higher education. The second MOU between the Department of Commerce, SelectUSA, and Kuwait Direct Investment Promotion Authority will encourage additional bilateral investments in both countries.

The U.S. recognizes Kuwait's efforts to help bring about a settlement to the Gulf Cooperation Council, or GCC, dispute, including Egypt. The United States and Kuwait both recognize the importance of GCC unity to meet the challenges of the region, not least of which are the threats from Iran, said Secretary of State Rex Tillerson. "We appreciate that Kuwait hosts U.S. military facilities and makes significant contributions to America's initiatives directed at Kuwaiti and regional security. We are pleased that we are increasing our security cooperation and information sharing to prevent threats we both face," said Mr. Tillerson.

The United States also appreciates Kuwait's leadership on humanitarian assistance, which helps stabilize the region. In recent years, Kuwait has provided more than $9 billion in humanitarian support in Syria, Iraq, Jordan, and Lebanon. Kuwait is the second largest single-country donor to these efforts worldwide after the United States.

Secretary Tillerson said, "We look forward to implementing the new agreements and strengthening our partnership for years to come."