Update Required To play the media you will need to either update your browser to a recent version or update your Flash plugin.
By VOA
Oct 2, 2016


On September 23, at a Lake Chad Basin side event at the UN General Assembly, the United States pledged an additional $41 million in funding to meet emergency needs for conflict-affected and vulnerable households in the Lake Chad Basin. This additional funding to UN and NGO partners will ensure tens of thousands of people receive critical humanitarian assistance, including emergency food assistance, safe drinking water, and shelter support, as well as interventions to address acute hygiene, nutrition, and protection needs.

The crisis is so severe that an estimated 134 children will die every day of severe malnutrition in Nigeria's Borno State unless treated.

According to the United Nations, there are more than 2.5 million internally displaced persons and more than 169,000 refugees living in the Lake Chad Basin. During the Lake Chad Basin side event the U.S. Ambassador to the United Nations Samantha Power highlighted the pervasive food insecurity in the region. Ambassador Power stated that the crisis is so severe that an estimated 134 children will die every day of severe malnutrition in Nigeria's Borno State unless treated. "And this is just a sliver of the consequences if we come up short [on raising enough funds],” she said.

The United States has now provided more than $359 million in humanitarian aid to the region since 2015. The United States continues to be the largest donor to the area. At the recent high-level meeting, donors pledged $163 million of the $542 million needed between September and December. In addition to the U.S., major donors include Belgium, Italy, and Britain. 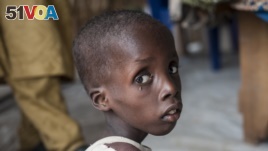 A boy suffering from severe acute malnutrition sits at one of the UNICEF nutrition clinics, in the Muna informal settlement, which houses nearly 16,000 IDPs (internally displaced people) in the outskirts of Maiduguri capital of Borno State.

The United States urges other donors to fulfill their pledged contributions and consider donations of additional humanitarian assistance for the millions of people in the region whose lives have been devastated by Boko Haram's senseless violence.