Update Required To play the media you will need to either update your browser to a recent version or update your Flash plugin.
Joe DeCapua
February 12,2015

Three federal agencies – the Departments of State, Interior and Justice – have released the National Strategy for Combating Wildlife Trafficking. It comes one year after President Obama announced its guiding principles.

In the strategy’s opening letter, Mr. Obama wrote that “because of the actions of poachers, species, like elephants and rhinos, face the risk of significant decline or even extinction.”

He added that “well-armed, well-equipped, and well-organized networks of criminals and corrupt officials exploit porous borders and weak institutions.”

Jimmiel Mandima is Director of Program Design and Partner Relations at the African Wildlife Foundation, which played a role in developing the strategy. He said, “I consider this to be extremely commendable on the part of the U.S. government. And for us this just means the global community will look at the U.S. as a global leader that is charting the way to deal with this big problem of challenging the wildlife trafficking.”

Elephant tusks and rhino horns are a big part of the poaching trade. Such items are in great demand in parts of Asia. 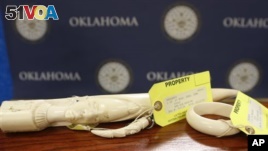 Pieces of carved ivory are on display at the state Capitol in Oklahoma City, following a news conference Tuesday, Feb. 10, 2015, held by Democratic state Rep. Mike Shelton, who is sponsoring a bill which he says bill is designed to help curb illegal poaching of wildlife in Africa. (AP Photo/Sue Ogrocki)

“The wildlife that have been targeted for this illicit trade are a natural heritage, mostly for Africa, but for the global community as a whole. The keystone species – elephants, rhinos, the great apes and the carnivores – are really ecological makers in the ecosystems and habitats. So they contribute to how the ecosystems provide services and goods to the whole global community,” he said.

Mandima said wildlife are an economic asset, driving the tourism industry in many parts of the world.

The anti-poaching strategy lists three priorities. Mandima said that the first is strengthening law enforcement in the U.S. itself.

The second part of the strategy calls for “reducing demand through public awareness campaigns in the U.S. and public diplomacy abroad.”

“Part of it is the issue of ignorance. Just not being aware of where these resources are coming from. So the awareness campaigns are really to educate the public. Communicate in very basic terms the source the products they are enjoying to simply say we are actually causing the decimation of keystone species,” he said.

The third priority is “building international cooperation and commitments.”

The African Wildlife Federation is contributing to the anti-poaching effort through its $10 million Urgent Response Fund. Mandima says it’s helping to pay for trained sniffer dogs that can detect illegal wildlife cargo. The dogs will be used at ports or airports in Kenya, Tanzania, Ethiopia and the DRC. The AWF also pays for public service announcements in China featuring actor Jackie Chan and basketball star Yao Ming.

“Talking to each other. Engaging our partners in Asia, in Africa, in having one common voice,” Mandima said.

Mandima said it’s time that major kingpins in wildlife trafficking are prosecuted and sentenced to set an example.

The U.S. National Strategy for Combating Wildlife Trafficking says the crisis must be addressed “aggressively and quickly, or it will be too late.”