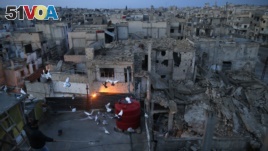 A pigeon keeper watches his pigeons fly from the roof of is home in the war-damaged Bab Dreib neighborhood of the old city, in Homs, Syria, Jan. 16, 2018.

ISIS has lost the vast majority of the territory it once held in Syria, as it has in Iraq. But while Russia may consider the fight in Syria to be over, U.S. Acting Assistant Secretary of State for Near Eastern Affairs David Satterfield said recently before Congress that the United States remains committed to the total and enduring defeat of ISIS and other terrorist groups in Syria and the region, and to ensuring that they cannot regenerate and return.

One thing that such an enduring defeat requires is a credible political process leading to a government chosen by the Syrian people, without Bashar Al Assad at the helm.

“They've inflicted suffering and countless deaths on the Syrian people...This regime is a magnet for terror,” Mr. Satterfield said. And while acknowledging the grave challenges ahead, he declared that with the U.N-led Geneva process and international support for credible electoral and constitutional reform, political transition in Syria is “a potentially achievable goal.”

Progress toward that goal depends in part on Assad's ally Russia: “We're going to need Russia to put pressure on the regime to abide by Security Council Resolution 2254 and participate in political discussions in Geneva...Why should Russia do that?” Mr. Satterfield asked. “Because minus such engagement there's going to be no money coming into Syria [for reconstruction]. There's going to be no legitimization from the broad international community, either for Russia or for Syria.”

Resolution 2254's political process “is the key,” Mr. Satterfield declared. “It is the key to addressing Assad in his departure. It is the key to resolving the question of foreign forces and Iranian influence.” And our tools to move that process forward, he said, include “the denial of legitimacy and authenticity to any claim of victory by the regime or its supporters in Moscow or Tehran, and the withholding of reconstruction funds, which are vital to the regime and...Moscow's interests over the long-term.”

The United States, Acting Assistant Secretary Satterfield said, “is committed to remaining in Syria to achieve all of our strategic goals,” including the enduring defeat of ISIS, progress on a Syrian political transition, and a diminution of Iran's malign influence in and around Syria. The evaluation of these goals, he declared, will not be based on calendars, but on the assessment of conditions reviewed “on a progressive basis over the time ahead.”