U.S. Promotes the Success of the Asia-Pacific

Update Required To play the media you will need to either update your browser to a recent version or update your Flash plugin.
By VOA
Feb 27, 2018


It is increasingly clear that no geographical area is more important to the future of the United States than the Asia-Pacific. It is home to one-third of the world's population, produces one-third of global GDP, and boasts some of the largest and most dynamic economies in the world, said Acting Assistant Secretary for East Asian and Pacific Affairs Susan Thornton in recent testimony before the Senate Committee on Foreign Relations.

“But there are very real security and economic challenges in the Asia-Pacific region, including the menacing threat of North Korea, the rise of an authoritarian China, and the spread of terrorism and extremism. The threat from North Korea continues to increase, tensions and extremism are on the rise,” she said. “Backsliding on democracy, governance and corruption, and human rights is also undermining prospects for stability and growth in some countries.”

These problems will not be resolved without strong, determined leadership, and the Administration of President Donald Trump is determined and up to the task. 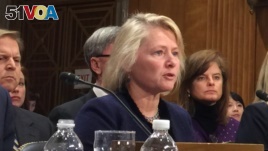 We have also made clear to China our desire for a productive relationship, and that we must work to manage and resolve differences. But we will not tolerate any attempts to displace the United States in Asia, or to coerce or bully countries in the region.

Finally, we continue our work with APEC to promote high standards and fair trade, and to support ASEAN-centered regional architecture.

“The administration, under President Trump's leadership, is working to expand and deepen partnerships throughout the region via our Indo-Pacific strategy, to ensure that countries have support to make their own decisions and don't feel pressured to take on obligations that undermine good governance or long-term growth,” said Acting Assistant Secretary Thornton. “The United States is a Pacific power and will remain committed to this region's success.”