Update Required To play the media you will need to either update your browser to a recent version or update your Flash plugin.
By VOA
Nov 4, 2016


The United States has been re-elected to the United Nations Human Rights Council. U.S. Secretary of State John Kerry thanked the General Assembly for its support and pledged to continue to work with the international community to address urgent human rights concerns.

U.S. engagement has helped transform the Council into a more balanced and credible organization and has helped focus the global spotlight on grave violations and abuses of human rights around the world. Since the U.S. joined the Council in 2009, it has created Commissions of Inquiry for Syria, North Korea, and Burundi; adopted country-specific resolutions on Sri Lanka, Iran, and Burma; passed groundbreaking resolutions promoting and protecting the rights of freedom of assembly and association; and created an independent expert on violence and discrimination based on sexual orientation and gender identity. 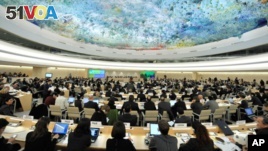 The council membership is based on equitable geographical distribution.

"While important challenges remain, including ending the Council's excessive and biased focus on Israel," said Secretary Kerry, "we look forward to cooperating with other Council members to address human rights concerns, advance human rights around the world, and ensure the Council fully realizes its purpose."