Update Required To play the media you will need to either update your browser to a recent version or update your Flash plugin.
By Daniel Schearf
Feb 17, 2017


MOSCOW — Russia has reacted defensively and cautiously this week after the resignation of President Donald Trump's national security adviser, Michael Flynn, who was considered among the most Kremlin-friendly in the new administration.

"I think that it worries Russian lawmakers and Russian policymakers because he has been considered to be one of very few pro-Russian American politicians,” said Pavel Sharikov, with the Institute for U.S. and Canadian Studies.

While the Kremlin called Flynn's resignation a U.S. internal matter, Russian lawmakers described it as politically motivated against Russia.

"Yes, Flynn wrote in his report that he did not tell the president about his contacts with the leadership of the Russian embassy in the USA.,” said the Chairman of the Foreign Relations Committee at Russia's State Duma Leonid Slutsky. “But this may be some sort of political and informational action, which was prepared in advance."

Officials bluntly dismissed the Trump White House calling on Russia, for the first time, to de-escalate violence in Ukraine and return the Crimean peninsula that Moscow annexed in 2014.

"We do not give back our own territory,” said Russia's Foreign Ministry Spokeswoman Maria Zakharova. “Crimea is territory belonging to the Russian Federation. That is it."

U.S. lawmakers critical of Trump are not taking any chances; they introduced a bill to block the president from lifting sanctions against Russia over Ukraine without congressional approval.

"This is purely a newspaper report which is not based on any facts. And which does not point to any real facts,” said Dmitry Peskov.

Some are calling for a deeper inquiry into White House ties to Russia.

Russians are still hopeful that relations with the United States will improve under Trump, but they also are increasingly cautious as the controversy and political turmoil play out.

“We do not know what line he will choose, but Crimea is Russian for sure,” said accountant Alexandra. “I do not know how he will carry on, but I hope for the better. I hope that we will have good relations with America.” 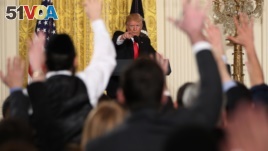 President Donald Trump calls on a reporter during a news conference in the East Room of the White House in Washington, Feb. 16, 2017. Eager to improve U.S.-Russian relations before he got elected, Trump said at the news conference "Now, I don't know that we're going to make a deal."

Adding to tensions are allegations the Kremlin violated a missile treaty with the United States, positioned spy ships off the U.S. East Coast and had Russian jets buzzed a U.S. Navy ship in the Black Sea.

The Kremlin dismissed the allegations, and President Trump made no immediate comment.