Update Required To play the media you will need to either update your browser to a recent version or update your Flash plugin.
By VOA
Sep 14, 2017


The U.S. Department of the Treasury announced targeted sanctions on two South Sudanese government officials and one former official for their roles in threatening the peace, security, or stability of South Sudan. Three companies that are owned or controlled by one of the officials were also sanctioned.

The measures taken against Malek Reuben Riak Rengu, Michael Makuei Lueth, and Paul Malong Awan make clear that the U.S. government will impose consequences on those who expand the conflict and derail peace efforts. 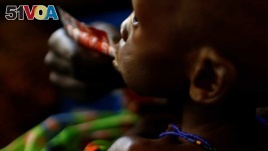 A mother feeds her child with a peanut-based paste for treatment of severe acute malnutrition in a UNICEF supported hospital in the capital Juba, South Sudan. (File)

The United States stands ready to impose other measures against those responsible for undermining the peace, security, or stability of South Sudan. As the Advisory demonstrates, the United States is committed to increasing scrutiny on those who enrich themselves through corruption while the South Sudanese people suffer through economic hardship and a dire humanitarian crisis.

Six million people in South Sudan – half of the population – face life-threatening hunger while more than four million people have been displaced from their homes, including two million refugees. This is a man-made crisis, and one the government of South Sudan can stop, said State Department spokesperson Heather Nauert.

"We continue to make clear to South Sudan's leaders that they must honor their declared ceasefire, revive the 2015 Agreement on the Resolution of the Conflict in the Republic of South Sudan by engaging meaningfully with opposition parties, bring an end to atrocities, stop the harassment of aid workers, stem human rights abuses, cooperate fully with the United Nations Mission in South Sudan, and take action against corruption," said Ms. Nauert.

The United States urges all parties to engage constructively in the upcoming South Sudan peace process.