US Says It Stands With India in Fighting Terrorism

Update Required To play the media you will need to either update your browser to a recent version or update your Flash plugin.
By 51VOA
11 March, 2019


U.S. Secretary of State Mike Pompeo met with Indian Foreign Secretary in Washington Monday and told him that the United States stands with India in fighting terrorism.

After their meeting, the State Department said the two discussed the importance of bringing to justice those responsible for a suicide attack on an Indian paramilitary convoy claimed by Pakistan-based militants. 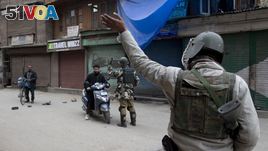 The State Department said the diplomats spoke of "the urgency of Pakistan taking meaningful action against terrorist group operating on its soil."

A Pakistan-based militant group claimed responsibly for that violence.

New Delhi has vowed to punish Islamabad for sheltering the militants, saying the Indian army chief has been given a "free hand" to take whatever action is required.

Pakistan rejects Indian charges of playing a role in the February attack and maintains the militant group has long been outlawed as part of counter-extremism measures.