Update Required To play the media you will need to either update your browser to a recent version or update your Flash plugin.
By VOA
Jan 12, 2018


The United States has suspended security assistance to Pakistan's military due to the government's failure to take decisive action to deny safe haven or lawfully detain those terrorists and militants who threaten U.S. interests.

Exceptions may be made on a case-by-case basis if they are determined to be critical to national security interests. The suspension is not a permanent cut-off at this time. Security assistance funding and pending deliveries will be frozen but not cancelled, as we continue to hope Pakistan will take the decisive action against terrorist and militant groups that we seek. We do not intend to reprogram any funds at this time. 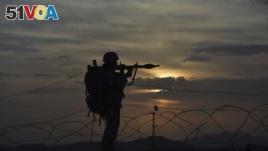 President Donald Trump announced during his South Asia policy speech in August that "no partnership can survive a country's harboring of militants and terrorists who target U.S. service members and officials." State Department spokesperson Heather Nauert noted that "despite a sustained high-level engagement by this administration with the government of Pakistan, the Taliban and the Haqqani Network continue to find sanctuary inside Pakistan as they plot to destabilize Afghanistan and also attack U.S. and allied personnel."

"Pakistan," said Ms. Nauert, "has greatly suffered from terrorism, and the security services have been effective in combatting the groups that target Pakistani interests such as al-Qaida, ISIS, and the Pakistani Taliban."

The U.S. has helped Pakistan fight against these groups. But now, said spokesperson Nauert, it is time for "Pakistan to deny safe haven or lawfully detain those terrorists and militants who threaten U.S. interests."

U.S. civilian assistance programs in Pakistan are not included in the suspension. Pakistan remains an important country in the region and in the world, and has historically been a vital partner for the U.S. The United States remains committed to the development of Pakistan as a stable and prosperous democracy, at peace with itself and its neighbors.

The United States stands ready to work with Pakistan in combatting all terrorists without distinction, and hopes to be able to renew and deepen its bilateral security relationship when Pakistan demonstrates its willingness to aggressively confront the Afghan Taliban, the Haqqani Network, and other terrorist and militant groups that operate from within the country.