Update Required To play the media you will need to either update your browser to a recent version or update your Flash plugin.
By VOA
Oct 29, 2017


The United States has supported Burma's gradual transition toward an open, democratic society in recent years.

“But at the same time, we express our gravest concern with recent events in Rakhine State and the violent, traumatic abuses Rohingya and other communities have endured,” said State Department spokesperson Heather Nauert. 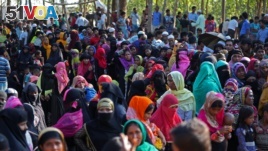 “It is imperative,” she said, “that any individuals or entities responsible for atrocities, including non-state actors and vigilantes, be held accountable.”

That's why the United States is taking the following actions:

Since August 25, the United States has ceased consideration of JADE Act travel waivers for current and former senior leadership of the Burmese military.

The U.S. is considering economic options available to target individuals associated with atrocities.

All units and officers involved in operations in northern Rakhine State are considered to be ineligible to receive or participate in any U.S. assistance programs.

The U.S. is working with international partners to gain access to relevant areas for the United Nations Fact-Finding Mission, international humanitarian organizations, and media.

The U.S. is consulting with allies and partners on accountability options at the UN, the UN Human Rights Council, and other appropriate venues and the U.S. is also exploring targeted sanctions.

The United States will continue to support Burma's transition to democracy, as well as efforts to resolve the current crisis in Rakhine State, which has caused more than 600,000 Rohingya to flee since August 25.

The government of Burma, including its armed forces, must take immediate action to ensure peace and security; implement commitments to ensure humanitarian access to communities in desperate need; facilitate the safe and voluntary return of those who have fled or been displaced in Rakhine State; and address the root causes of systematic discrimination against the Rohingya by implementing the Rakhine Advisory Commission's recommendations, which includes providing a credible path to citizenship

The United States stands ready to support these efforts.