Update Required To play the media you will need to either update your browser to a recent version or update your Flash plugin.
By VOA
Aug 20, 2017 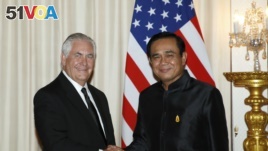 The U.S.-Thailand relationship is "historic," said U.S. Secretary of State Rex Tillerson on a recent visit. "We have been treaty partners for over 184 years, and we've been allies for over 60," and "we want to continue to grow that relationship."

Secretary Tillerson paid tribute to the late Thai King Bhumibol, calling him "a wonderful friend of America" who "set the tone for the relationship between the United States and Thailand."Next year will mark 200 years of relations between the U.S. and Thailand. "That's significant," said Secretary Tillerson, "because elections are scheduled here in Thailand next year, as well, to return the country to civilian control. We certainly hope those elections proceed as scheduled."

Thailand with the help of U.S. Embassy mission staff has made significant strides in many areas, including healthcare. Notably, said Secretary Tillerson, Thailand has "become the second country in the world now to eliminate mother-to-child transmission of HIV, and that is an extraordinary achievement."

U.S. medical staff directly collaborated with Thai researchers to develop some of the world's first Japanese encephalitis and hepatitis A vaccines.Secretary Tillerson expressed his appreciation for "the strong support for ongoing research to help address and hopefully eradicate other diseases like malaria, the Zika virus, and other tropical diseases."

People-to-people ties between the U.S. and Thailand have always been strong and continue to grow with an active exchange of Thai students and American students.

The U.S.-Thai security alliance dates back to an era of conflict in the region and remains strong, said Secretary Tillerson. Today both countries hold more than 130 joint military exercises. "That's just a great testament to how close that security alliance is," said Secretary Tillerson, "how it's valued by us and it's valued by the Thai Government."

The United States looks forward to building on the historic relationship it has with Thailand in the years ahead.