US Hiring Rebounds in April; Unemployment Dips to 5.4%

Update Required To play the media you will need to either update your browser to a recent version or update your Flash plugin.
Mil Arcega
May 08,2015

After the weak job gains in March, fewer than 100,000 hires, Bankrate.com's chief financial analyst Greg McBride says, the second quarter is off to a good start. He spoke with VOA on Skype.

"The April jobs report shows we are back on track," he said. "It really reveals that March was the aberration — that was the month where the results were very poor, and they were revised lower with [Friday's] release. But, you know, April really kind of gets us back in the game."

April's job numbers were an encouraging sign for investors, who helped boost stock prices on Wall Street by more than 1 percent. Adding to the optimism, average hourly earnings increased, but just barely. At just 3 cents more per hour, McBride says, it's a step in the right direction, but not enough to significantly boost growth. 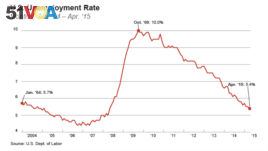 "People don't have enough spending power," he said. "They don't have enough breathing room in the household budget, and that's why we've had this perpetually slow-growth economy — because consumers are not in a position where they can ramp up spending on a consistent basis."

Until employers start ramping up wages, McBride says, the housing market is likely to remain sluggish. Part of the problem, according to the National Association of Business Economics' Ken Simonson, is inertia.

"Employers have been very cautious about hiring people, raising wages, and workers are also nervous that a job won't last," he said, "so it's made them less aggressive about pushing for wage increases in their current job or changing jobs."

That could change as competition for skilled workers heats up.

The new jobs data show about 8.5 million Americans are still out of work, but that's down more than 1 million from a year ago.