U.S. Values Its Partnership With Jordan

Update Required To play the media you will need to either update your browser to a recent version or update your Flash plugin.
By VOA
Apr 10, 2017


During King Abdullah II's recent visit to the White House, President Donald Trump pledged to preserve and strengthen the relationship between the United States and Jordan. At a press conference with the King, he noted that the historic ties and close friendship between the two countries date back three quarters of a century:

“In that time, the Middle East has faced many periods of crises and unrest, perhaps never like it is today, however. Through them all, America has looked to Jordan as a valued partner, an advocate for the values of civilization, and a source of stability and hope.”

One of the gravest threats to Jordan and the region is undoubtedly ISIS. President Trump praised Jordan's role as a partner in the campaign to defeat the terrorist group and noted Jordan's “tremendous sacrifices in this battle against the enemies of civilization.” He praised the courage of Jordan's service members, many of whom have given their lives in the fight to defeat ISIS, and he called King Abdullah “a thoughtful and determined partner” and “a great warrior.” 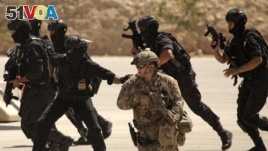 Mr. Trump also acknowledged the vital role Jordan has played in hosting refugees from Syria and noted that the United States will contribute additional funds to Jordan for humanitarian assistance.

Both King Abdullah and President Trump condemned the recent chemical weapons attack by the Assad regime in Syria that killed dozens, including women and children. Mr. Trump called their deaths “an affront to humanity,” and King Abdullah agreed that such savagery “should not be tolerated.”

Finally, President Trump said that both men had discussed ways to advance the cause of peace in the Middle East, including peace between the Israelis and Palestinians. King Abdullah praised the efforts by President Trump to engage on this issue, and said the President has Jordan's full support and the support “from many, many countries in our region.” President Trump called the King a “tireless advocate” for a peaceful solution and someone who will help him achieve it.

“Working together,” President Trump said, “the United States and Jordan can help bring peace and stability to the Middle East.”