Update Required To play the media you will need to either update your browser to a recent version or update your Flash plugin.
By VOA
Jun 23, 2018


For the last year, the United States has been working to reform the United Nations Human Rights Council into a serious advocate for human rights.

“Regrettably,” said U.S. Permanent Representative to the United Nations Nikki Haley, “the U.S. call for reform was not heeded”:

“Human rights abusers continue to serve on and be elected to the council and the world's most inhumane regimes continue to escape scrutiny, and the council continues politicizing and scapegoating of countries with positive human rights records in an attempt to distract from the abusers in their ranks.”

For these reasons the United States has officially withdrawn from the UN Human Rights Council. 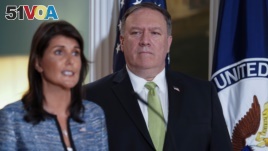 One of the United States' central goals was to prevent the world's worst human rights abusers from gaining Human Rights Council membership. What happened? The Democratic Republic of Congo - known to have one of the worst human rights records in the world - was elected to the council.

The Council also failed to respond in December and January when the Iranian regime killed numerous demonstrators and arrested hundreds more simply for expressing their views.

And then there is the matter of the chronic bias against Israel, noted Ambassador Haley. Last year, the United States made clear that it would not accept the continued existence of agenda item seven, which singles out Israel in a way that no other country is singled out. Earlier this year, “the Human Rights Council passed five resolutions against Israel – more than the number passed against North Korea, Iran, and Syria combined,” said Ambassador Haley.

America will continue its proud legacy as a champion of human rights, as the world's largest provider of humanitarian aid, and as a liberator of oppressed people. “While we do not seek to impose the American system on anyone else,” said Ambassador Haley, “we do support the rights of all people to have freedoms bestowed on them by their creator. That is why we are withdrawing from the UN Human Rights Council, an organization that is not worthy of its name.”