Update Required To play the media you will need to either update your browser to a recent version or update your Flash plugin.
By VOA
Aug 13, 2018


Why would a U.S. Government agency specializing in administering civilian foreign aid and development assistance, concern itself with religious freedom in the countries where it works?

“At USAID, we see freedom of worship as an essential element in our pursuit of government that is citizen-centered and citizen-responsive,” said USAID Administrator Mark Greene. “It is inseparable from freedoms of expression, assembly, association, and freedom from discrimination.”

But a more practical reason is that faith-based organizations frequently work with USAID to deliver development assistance or humanitarian relief to marginalized people. “Faith-based partners are often uniquely trusted in those forgotten communities,” said Administrator Green. “Religious liberty matters because it enables faith-based groups to work with USAID and others without surrendering their essential faith character.”

Religious intolerance, on the other hand, frequently drives violence and oppression, marginalization, and persecution of entire populations. To see what unchecked intolerance looks like, we need look no further than ISIS and the atrocities it has committed.

“At USAID, because we really look at freedom of worship as a core human right, we're supporting programs to address religious hate speech and interfaith conflict, to promote the strengthening and enforcement of laws that protect religious freedom, and to increase the capacity of civil society to advocate for it,” said Administrator Green. This includes technical assistance and financial support for civil society. 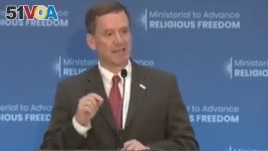 USAID is presently undertaking reforms to its partnership and procurement process to make partnering with NGOs and civil society groups easier.

At the same time, to help prevent the worst manifestations of religious intolerance before they cause harm, USAID is working to assemble metrics to measure capacity and commitment in the countries where it is active, such as the capacity of civil society, and the inclusiveness of government policies.

Finally, working with its partners, USAID aims to reinforce and strengthen ethnic and religious pluralism where it has historically existed.“It isn't about the content of faith; it never has been,” said Administrator Green.“It's about society's tolerance for multiple faith traditions. We believe that religious pluralism, which is part of a cultural mosaic, we believe it is worth preserving as a matter of development, as well as an expression of our values.”