Update Required To play the media you will need to either update your browser to a recent version or update your Flash plugin.
By VOA
Nov 10, 2016


During the American Civil War, President Abraham Lincoln called on his countrymen in his famous Gettysburg Address to ensure that liberty "shall not perish from the earth."

His words have inspired many over the years, including millions in our nation's armed services who fought to preserve not only America's freedom, but that of other nations as well.

Today, Veterans Day, America pauses to honor these men and women, and the values of duty and sacrifice they represent. Long after they leave uniform, they symbolize what it means to be a citizen of a free land. 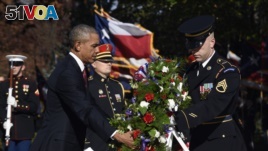 The holiday, observed every year on November 11, originated with the armistice that ended The First World War in 1918. The conflict, fought in Asia, Africa, scattered islands in the Pacific and the waters off South America, as well as on the battlefields of Europe, was seen as "the war to end all wars." But other wars followed, and in 1954 President Dwight Eisenhower expanded the holiday to honor all who have served in uniform both in war and peace.

Our government continues this effort to this day, with program to help veterans leaving the military to find employment and ease their transition into civilian life. "Honoring our sacred trust with America's veterans means doing all we can to help them find work when they come home so they never feel as if the American Dream they fought to defend is out of reach for them and their families," President Barack Obama said.

At its core, though, Veterans Day isn't about war. It commemorates no battlefield victory or defeat, it celebrates no advancement of political or territorial ambition. Rather, it's a day of remembrance, echoing similar holidays in Great Britain, Canada, South Africa and other nations that honor military veterans for their service and sacrifice.