Update Required To play the media you will need to either update your browser to a recent version or update your Flash plugin.
By VOA
Jul 12, 2017


The United States is deeply concerned over the recent violations of the ceasefire in the Nagorno-Karabakh conflict, which have resulted in multiple reported civilian and military casualties, including a young child. In a statement issued July 6, the State Department called on both sides to cease military action and return to the negotiation table.

In their statement released July 5, the Co-Chairs of the Organization for Security and Cooperation in Europe (OSCE) Minsk Group called upon the parties to cease military action as “violence only begets further violence and accomplishes nothing.” The Co-Chairs called upon the sides to return to the negotiation table in good faith. In an earlier June 19 statement, the Co-Chairs underscored that such negotiations are the only way to bring a lasting peace to the people of the region, who expect and deserve progress toward settlement of the conflict. 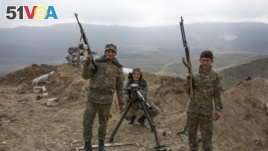 Recent violations of the ceasefire in Nagorno-Karabakh deeply concern the U.S.

Stéphane Dujarric, the United Nations Spokesman for the Secretary-General stated on July 6, that the UN also shares the concerns of the OSCE Minsk Group Co-chairs over recent ceasefire regime violations, “We [the UN] call upon the sides to refrain from any military action, and strongly urge them to take immediate steps to de-escalate tensions and prevent further violence. An early return to the negotiation table in good faith is the only way to resolve this long-standing and dangerous conflict,” Mr. Dujarric said.

For its part, the United States continues to engage intensely with the sides. The longstanding policy of the United States, shared by the Minsk Group co-chairs, is that a just settlement must be based on international law, which includes the Helsinki Final Act, in particular the principles of the non-use of force or threat of force, territorial integrity, and equal rights and self-determination of peoples.