Update Required To play the media you will need to either update your browser to a recent version or update your Flash plugin.
Carla Babb
January 01,2016


PENTAGON— It appears that 2015 was the year of the U.S. military woman.

After years of studies and trials, all military positions, including combat positions, are opening up to females.

The historic decision was announced by Secretary of Defense Ash Carter.

"As long as they qualify and meet the standards, women will now be able to contribute to our mission in more ways than before. They’ll be allowed to drive tanks, fire mortars and lead infantry soldiers into combat. They’ll be able to serve as Army Rangers and Green Berets, Navy Seals, Marine Corps infantry, Air Force parajumpers and everything else that was previously only open to men,” Carter said. 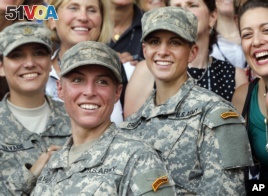 “You can’t really have an off day; you can’t be tired. You need to go the extra mile,” said Griest.

This helped clear the way for the Army’s recommendation to allow women in all posts.

"I think probably soon we're going to say, 'Dang it, why didn't we do this 10 years ago?'" said General Ben Hodges, the commander of U.S. Army Europe.

Hodges said he’s excited about the future force and doesn’t worry about the naysayers.

“It'll make us smarter, more effective, and that rather than criticizing, they should be out encouraging great young men and women to want to step forward and serve their country,” he said.

One branch, however, wasn’t quite ready to ask women to serve in its infantry. The Marine Corps provided testing which showed male-only Marine units were faster and more lethal.

When it came to critical thinking, however, the joint male-female units outperformed the male only groups. 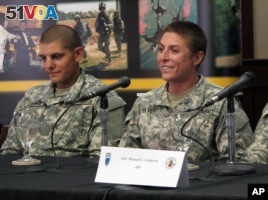 Katherine Kidder with the Center for a New American Security said the Marine Corps position poses questions about what is desirable in the armed forces.

“So the question that it sets up there is what kind of military do we want? What kind of Marine Corps do we want? Is it one that’s purely physical or is it one where critical thinking plays a part in an otherwise very physical demanding job,” said Kidder.

In the end, experts say the decision was not just about fairness, but talent.

“Just because you’re a man doesn’t necessarily mean that you are qualified for the position to begin with, and so thinking about it in a broader talent management strategy, you’re ensuring that you’re getting the best and that you also have standards for everyone to uphold, whether they are a man or a woman,” said Kidder.

And based on the new military rules, ability, not the gender of these troops, will determine their fate.