Update Required To play the media you will need to either update your browser to a recent version or update your Flash plugin.
By VOA
Jun 30, 2018


Today, the West faces a number of threats, and nowhere is this more evident than in Central Europe. Indeed, Central Europe is one of the battlegrounds where several nations are attempting to increase their influence.

“There is Russia, which uses energy monopolies, and dirty money and military and hybrid threats to cow its neighbors into a kind of vassalage. Russia has invaded two of its neighbors and grabbed their territory,” said Assistant Secretary for European and Eurasian Affairs Wess Mitchell. 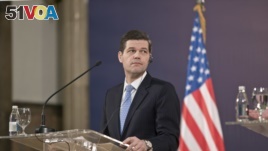 Wess Mitchell, US assistant Secretary of State for European and Eurasian affairs. (File)

Chinese economic engagement, and thereby its ability to exert greater influence in the region, has increased significantly in central Europe in recent years.

“And though they seem far away from Central Europe, Iran and radical extremism present very real threats to Europe and the West. They create misery and death for people in the Middle East. They spark mass migration on a scale not seen in recent history that radiates instability into the very heart of Western societies and politics, straining European cohesion, budgets, and social systems.”

And no one understands better than do Central Europeans what happens when despotism triumphs over liberty.

This means that we must recognize these threats and take them seriously. That begins with strengthening our defense.

It means that the United States must work with our allies to find alternatives to Russian and Chinese energy options.

And it means that we must win the battle for hearts and minds.

“The West is a community—a group of nations bound together by history and heritage and cultures, by shared sacrifice, and a common commitment to the cause of freedom,” said Assistant Secretary Mitchell.

“The West is a powerful, creative force that has shown resilience through history's darkest chapters. Our job today is to strengthen it; to strengthen ourselves from within, as nations, as Europeans and Americans, and as a Western alliance, so that our children may know the great blessings of peace and prosperity in their lifetimes that we have known in ours.

“Let us go forward together in that united task.”