Update Required To play the media you will need to either update your browser to a recent version or update your Flash plugin.
Joe DeCapua
January 23,2015


The U.N. Children’s Fund says global education is in crisis. In a new report, UNICEF warns millions of children are not learning the very basics. The report was released at the World Economic Forum in Davos, Switzerland.

“Education can put people on a path towards good health, empowerment and employment and it helps to rebuild more peaceful societies. It gives children in emergencies a future, a place of safety and a sense of normalcy. And we all know that the benefits of girls’ education go well beyond their own education, but extend to their children.”

Brandt said that despite the benefits education offers, there is an education crisis. 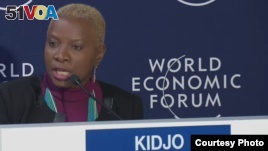 “58-million children and 63-million adolescents are out of school. And worse, we’re also facing a learning crisis because an estimated 130-million children cannot read or write, despite reaching grade four. And it’s these two twin crises that are being addressed in this new UNICEF report – The Investment Case for Education and Equity -- which we are very pleased to launch here,” she said.

She said initial progress in enrolling children in school has slowed down. It may be hard to reverse the trend.

“The population of school age children, especially in the poorest countries, is increasing. And it is increasing very, very fast. For instance, in sub-Saharan Africa, over 440-million children must be enrolled by 2030 to achieve basic education for all, which means that is two and a half times the number that are being enrolled today,” she said.

The UNICEF official said that low income countries need an additional $26 billion annually to provide basic education. She says that’s the equivalent of five percent of the annual profits of the world’s 15 highest earning companies.

“It was said once that the only international language that the world understands is the cry of a child. But it seems to me that over the last year, in crisis after crisis, we have neglected children even in the most difficult, precarious and sad situations,” he said.

For example, he said, there are 500,000 Syrian children refugees in Lebanon – but only 100,000 have been absorbed into Lebanon’s education system. Brown says the rest are vulnerable to child labor and child marriage.

“We have the schools. We have the teachers. We have the agreement of the government. We have the plan. UNICEF has drawn it up. But we have not been able to find the extra $136-million in international funding that is needed,” he said.

Brown said that the response to a humanitarian crisis should include an emergency fund for education.

“Half the children out of school in the world are in crisis countries where there are conflicts. And the last year has been a year where we celebrated the 25th anniversary of the Convention of the Rights of the Child, but it is a year that has been more marked by the violation of the rights of millions of children,” he said.

Musician Angelique Kidjo said in many African countries educating girls is not considered important or necessary.

“In order to transform my continent, we need highly educated girls. Secondary and tertiary education are key to transform completely our society.”

Kidjo, a UNICEF Goodwill Ambassador, said, “I’m not doing this to be famous. It’s not my point. It’s not my purpose in life. It’s because I believe deeply in the people of my continent. You give them the chance and you empower them. You don’t pity them. You don’t dehumanize them. You just sit with them and say, ‘what do you need?’”

She told the World Economic Forum there can be no peace in the world without educating children.

“Let’s invest in education to live on the world of peace and take the fuel out of the terrorist group(s). All those angry people out there because they felt left out of the system that we have today.”