Update Required To play the media you will need to either update your browser to a recent version or update your Flash plugin.
Joe DeCapua
June 03,2015


Well over 600 million people around the world depend on wetlands for their livelihoods, such as fishing or farming. Yet experts say since 1900, 64 percent of wetlands have disappeared and the rest are on the decline. More than 800 delegates from 160 countries are meeting in Uruguay (6/1-9) to find solutions to the problem.

The summit in Punta del Este is the 12th meeting on the Ramsar Convention on Wetlands. The international treaty provides a framework for the “conservation and wise use of wetlands and their resources.”

Dr. Christopher Briggs, the Secretary-General of the Ramsar Convention, said, “Wetlands are important to all of us because it is from wetlands that we have our fresh water for cooking, for eating, for washing. All our fresh water comes from wetlands. The wetlands indeed also clean and purify the water of its substances – pollution. They also help to store carbon. They provide livelihoods. 660 million people around the world live from aquaculture and fishery from wetlands.”

And wetlands are a buffer when nature turns destructive.

“They’re also critical for us in terms of disaster risk reduction – helping everyday people to protect their livelihoods and their homes against the impacts of rising sea level, of tsunamis and hurricanes.That is the best possible protection – the natural infrastructure along the coasts. And inland, the wetlands are there because they can buffer the impacts of both drought and flooding,” he said. 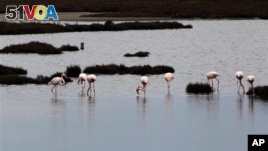 Flamingos gather in the wetlands, in the delta of the Axios, 20 miles west of Greek city of Thessaloniki, Sunday, Feb. 2, 2014. (AP/Photo Nikolas Giakoumidis)

Besides providing resources for fishing, farming, water and fodder, they’re a source of pleasure for millions of people.

Briggs said, “It is in wetlands that we spend our holidays – in beaches, in coastlines, in coral reefs, on mangroves, in lakes and rivers and ponds. That is what wetlands are. They are the source of sustainable development and they are vital for our future and for our children’s future.”

Besides losing 64 percent of the world’s wetlands since 1900, about 40 percent of the remaining wetlands have been degraded over the last 40 years. The decline continues at a rate of one and a half percent annually. Briggs said it’s because humans build their civilizations near them.

“We have built agriculture. We have built houses, roads, cities on wetlands because it is easy for them to be drained. But the services that they provide are also very important. And when we have what is now a massive loss of wetlands it is critical for the future – for a sustainable future – for us to look again at how we need to stop, prevent and restore wetlands.”

He compared it to other environmental losses.

“That compares with the worst loss of rainforest that was happening in the 80s in Brazil and Asia. So, the rate of loss of wetlands is serious. And at the same time as we have a growing population we desperately need those wetlands to provide the water for the sustenance – for the livelihoods – for the future of our people,” he said.

Briggs said the problem is not due to people denying it exists. Rather, he said, it’s people not knowing about it at all until recently. In 2014, three different indicators were released showing wetlands degradation. For example, the World Wildlife reported that 76 percent of the plant and animal species associated with wetlands have been lost over the last 40 years.

“I don’t think that there is a denial that there is a problem. There has been a complete lack awareness. And that’s what we have to put out there for the seven billion people on this planet – that there needs to be an increased level of awareness.This will allow us then to be able to build a future for nine billion, which is not impoverished, but is enriched by the opportunities given by wetland,” said Briggs.

It’s estimated the world’s population will grow to more than nine billion by 2050.

The Secretary-General of the Ramsar Convention said public awareness of wetlands should be just as high as it is for rainforests. And they protect against the effects of climate change by storing huge amounts of carbon and prevent it from entering the atmosphere.

For example, peatlands are turf areas consisting of partially decayed vegetation and other organic matter. They cover just three percent of the land’s surface, but they capture twice as much carbon as all the world’s forests.

The 12th Meeting of the Conference of the Contracting Parties to the Ramsar Convention on Wetlands is the treaty’s decision-making body. Briggs said he hopes delegates will agree to an “ambitious strategic plan to prevent, stop and reverse the degradation of wetlands.”