What is Needed for South Sudan

Update Required To play the media you will need to either update your browser to a recent version or update your Flash plugin.
By VOA
Aug 27, 2016


After recent meetings in Nairobi with the foreign ministers of a number of regional partners, U.S. Secretary of State John Kerry said that a regional protection force, authorized by the United Nations Security Council, is necessary to protect civilians in South Sudan's capital of Juba and to help facilitate the implementation of a peace accord reached by South Sudan's warring factions last year.

The Security Council approved the regional protection force within the United Nations Mission in South Sudan (UNMISS), on August 12, after violence broke out in and around the capital between forces loyal to President Salva Kiir and Former First Vice President Riek Machar.

During the height of the July 7-11 violence, soldiers from both sides committed heinous crimes, including rape, murder, and wanton destruction of property. Government forces also attacked UN Protection of Civilians sites and a UN compound. 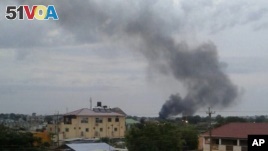 In this photo taken Sunday, July 10, 2016, black smoke is seen rising above the capital Juba, in South Sudan.

Since 2013, when the conflict first started in South Sudan, the country has been ravaged, with thousands of people killed and over two million driven from their homes.

Secretary Kerry noted that all the ministers who met in Nairobi agreed on the need for the deployment of the up to 4000-member protection force authorized by the UN Security Council. Secretary Kerry emphasized that the force does not challenge the sovereignty of the country. It has, he said, “a very clear mandate to...protect people for their access, their freedom of movement, and their ability to remain free from attack or ambush from any source whatsoever.”

The hope is, he said, that the protection force “will restore stability, will help the country to move faster to reconcile, will help by its presence alone...provide assurance and confidence to people about the future.”

Mr. Kerry announced that the United States, which is the largest donor of humanitarian relief to the people of South Sudan, will give an additional $138 million toward that effort, bringing its total contribution to more than $1.7 billion. But the “overwhelming need” in the country, Mr. Kerry said, “is to re-invigorate an inclusive political process and to implement the reforms that are set out in the...peace agreement.”

Secretary of State Kerry urged the people of South Sudan to respect their countrymen as equal under the law and to demand that their leadership “stop ...this fighting on an ethnic basis and get to the business of running the country in a responsible and inclusive way.”