Update Required To play the media you will need to either update your browser to a recent version or update your Flash plugin.
Michael Bowman
April 07,2015


WASHINGTON— A growing number of U.S. lawmakers of both political parties say Congress should have an up-or-down vote if a final accord is reached on Iran’s nuclear program. Even as the Obama administration braces for months of intensive international negotiations with Iran, it is also fighting to ensure that congressional actions do not torpedo the diplomatic effort.

A nuclear deal with Iran is too important for Congress to be silent, according to Republican Senator Bob Corker.

“I know there are a lot of details that will be worked out over the next several months. That is why, on behalf of the American people, Congress needs to be playing a role,” he said.

Corker wants to freeze any Iran sanctions relief for 60 days, giving lawmakers time to approve or reject a final accord.

He notes that Congress passed those sanctions to begin with. 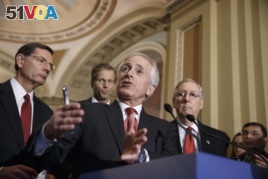 “Everyone would say that the congressionally-mandated sanctions are what helped in a strong way get Iran to the [negotiating] table,” he said.

The White House has threatened a veto.

“We do not believe that Congress should be in a position where they are going to vote on legislation prior to June that could interfere with the talks," said White House spokesman Josh Earnest, "and we would not envision a scenario where we would go along with any sort of congressional action that would undermine the president’s authority.”

But some Democrats are joining Republicans in calling for a vote on the deal. Charles Schumer, expected to be the Senate’s next Democratic leader, is among them.

If enough Democrats side with Schumer, Congress could override a presidential veto and block sanctions relief demanded by Tehran.

“The Republican-controlled Senate and House have no appetite to lift sanctions against Iran,” said Ken Sofer, national security analyst at the Center for American Progress.

He also sais said President Obama can suspend sanctions on his own, but eliminating them would require an act of Congress.

He says lawmakers have a role to play in an Iran deal, but not the one being debated.

“The role isn’t at the negotiating table trying to work out the exact details of the agreement, it is in the enforcement of the agreement. That is where Congress can play a very valuable role. Not by voting up-or-down on an agreement, but by making sure that Iran is sticking by its commitments,” said analyst Ken Sofer.

Senator Corker dismisses suggestions that robust congressional involvement will kill a deal. Sofer says Obama has work to do.

Action is expected soon. Corker’s bill could be approved by the Senate Foreign Relations Committee next week.