Working With EU on Trade

Update Required To play the media you will need to either update your browser to a recent version or update your Flash plugin.
By VOA
Aug 8, 2018


What President Donald Trump called a “breakthrough” on trade occurred when European Commission President Jean-Claude Junker sat down with Mr. Trump at the White House for a discussion that has eased tensions between the world's two largest trading partners.

On July 25 the two leaders agreed to work together toward eliminating tariffs and other trade barriers on all industrial goods other than cars. They also promised to work to reduce barriers and increase trade in services, chemicals, pharmaceuticals and medical products, as well as soybeans. 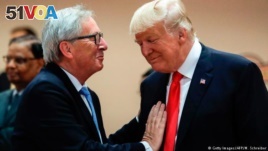 In addition, the two leaders pledged greater strategic cooperation on energy, with the European Union seeking to expand its imports of liquefied natural gas from the United States in order to help diversify its energy supply.

At a news conference after their meeting, President Trump outlined these areas of accord and noted too that that the two men agreed to launch a dialogue on standards, in order to increase trade across all product sectors, and to reduce bureaucratic obstacles to trade. And they agreed to work with like-minded partners, including by reforming the World Trade Organization, to address unfair trading practices, including intellectual property theft, forced technology transfer, industrial subsidies, distortions created by state-owned enterprises, and overcapacity.

President Trump noted that the general outline of what was agreed to by the United States and the EU is a commitment to move toward three zeros: zero tariffs, zero non-tariff trade barriers, and zero subsidies. The idea is to level the playing field.

President Trump characterized the meeting as the start of “a new phase in the relationship between the United States and the European Union –- a phase of close friendship; of strong trade relations in which both of us will win; of working better toward global security and prosperity.”