Update Required To play the media you will need to either update your browser to a recent version or update your Flash plugin.
Joe DeCapua
June 12,2015


In recent years, the economic outlook for many developing countries appeared bright. But the World Bank has lowered its expectations for 2015, saying they now face a series of tough challenges.

The World Bank projects developing countries will grow by 4.4 percent this year, instead of the earlier forecast of 4.8 percent. 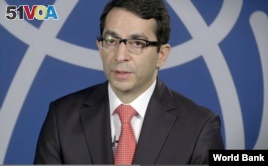 “Developing countries as a group have been slowing down since 2010," he said. "It’s fair to say that. But what happened in 2014 and a part of this year [was] a significant drop in oil prices started weighing on activity, especially in oil exporting economies.”

Bad news for developing oil-exporting countries, he said, is good news for importers.

“It is a windfall for the global economy. And we still think that the benefits of oil price decline will be materialized during the next 12 to 18 months. For oil exporting economies it’s a painful adjustment. But for oil importing economies there’s no question it’s a positive development.”

The decline in oil prices is causing a global economic shift.

The World Bank official said, however, consumers are still hesitant to use their savings from lower oil prices to buy things. Spending spurs economies, but there’s still a lack of consumer confidence.

So what about those oil exporting developing counties – like Nigeria and Angola -- that pinned their hopes on their oil reserves?

“For this year, we reduced our growth forecast for Nigeria and Angola. And in both countries you see policy adjustment as well. Nigeria reduced their expenditures, the fiscal spending. Angola, they reduced the fiscal spending. They are taking measures to adjust to this new environment. At the same time, over the medium term, we expect them to think about diversification -- to think about more investment in infrastructure -- investment in human capital,” Kose said.

He said that while diversification may be a painful process for Nigeria and Angola, in the long-term it could help them weather future economic shocks. For example, investing in non-oil sectors could allow them to have more trading partners.

The bank’s forecast for the turmoil-plagued Middle East and North Africa is just 2.2 percent this year. Officials are monitoring the various crises, saying they could trigger a rise in oil prices.

Another factor expected to negatively affect many developing nations is the predicted rise in U.S. interest rates.

A region that’s the exception to the World Bank forecast for developing nations is South Asia. It has a projected growth rate of 7.1 percent this year.

“South Asia is becoming the fastest growing region. The main driver of that is India with [a] strong monetary policy framework, willingness to undertake reforms. All of these send a very strong signal that medium term growth prospects are going to get stronger,” he said.

The World Bank Global Economic prospects report is more optimistic for 2016 and 2017. Growth forecasts for developing countries for those two years are 5.2 percent and 5.4 percent respectively.