Update Required To play the media you will need to either update your browser to a recent version or update your Flash plugin.
By VOA
Oct 16, 2016


October 16th is World Food Day, a day of action against hunger. The date commemorates the founding in 1945 of the United Nations Food and Agriculture Organization, or FAO. On this day, people around the world come together to declare their commitment to eradicate hunger in our lifetime

Over the past decade or so, we have seen a great reduction of people living with hunger on a nearly daily basis. Back then, about one in six people went to bed hungry most nights. Now it's about one in every nine. Nonetheless, that still leaves some 795,000 thousand chronically hungry people around the world.

Of these, 60 percent are women, and this despite the fact that most small farmers living in the developing world are women. And when women go hungry, so, all too often, do children. About 161 million kids under the age of five malnourished. This means that their brains won't develop normally, they may have difficulties learning, and their physical and cognitive growth is stunted. Lack of nutrition compromises not only their own success in the future, but also the development of the communities, economies and countries in which they live.

In addition to those children who are chronically undernourished, almost 5 million children under the age of 5 die of malnutrition-related causes every year. 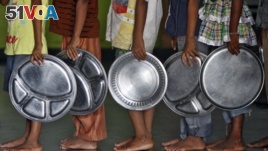 Children holding plates wait in a queue to receive food at an orphanage run by a non-governmental organisation in the southern Indian city of Chennai.

The global community is working to eradicate hunger, because it is the right thing to do. The first of the United Nations Millennium Development Goals, called for halving the proportion of people suffering from hunger and facing extreme poverty. We have achieved that goal. As we transition to a sustainable development agenda for 2030, we have raised our ambitions and are striving to effectively end hunger and extreme poverty altogether.

The United States aids this effort through its innovative Feed the Future initiative. We partner with country governments, many universities, multilateral and non-governmental organizations, transnational organizations like the UN, research communities and the private sector, to lift millions of vulnerable people out of hunger and poverty.

On World Food Day, the United States reaffirms its commitment to the fight against poverty, hunger, and under-nutrition.