Update Required To play the media you will need to either update your browser to a recent version or update your Flash plugin.
By VOA
Nov 4, 2017

The World Food Prize, known as the “Nobel Prize for Agriculture and Nutrition”, is the foremost international honor recognizing the achievements of individuals who have advanced human development by improving the quality, quantity or availability of food in the world. It was established in 1986 by Norman Borlaug, an agronomist and Nobel Peace Prize Laureate who is widely recognized as the "father of the Green Revolution". 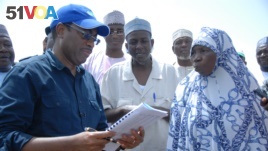 Over the past two decades, Dr. Adesina, formerly Nigeria's Minister of Agriculture and now the President of the African Development Bank, has worked tirelessly to expand Nigeria's agricultural production, thwart corruption and increase the availability of credit to smallholder farmers across Africa. As Minister of Agriculture, he introduced E-Wallet, a system of electronic vouchers which allows farmers to by-pass corrupt elements that had controlled the fertilizer distribution system for 40 years.

As a direct consequence of the E-Wallet system, the production of cassava, rice, sorghum, maize and cotton rose dramatically, resulting in a significant increase in farmers' income and significant improvement of food security for 40 million people in rural farm households.

Dr. Adesina pledged to use the 250,000 dollar award that comes with the World Food Prize, to provide fellowships and grants to young Africans dedicated to making a living through agriculture.

"Congratulations on winning the 2017 World Food Prize. Your Devotion to the cause of fighting hunger is admirable and deeply needed,” said Vice President Mike Pence in a statement read at the award ceremony by USAID Administrator Mark Green.“As our global food system is stretched, and the need to feed more people grows, agricultural transformation will require persistence from leaders like you in driving change and capitalizing on public and private sector expertise."