Update Required To play the media you will need to either update your browser to a recent version or update your Flash plugin.
By VOA
Aug 29, 2018


Zimbabwe has a new president. Emmerson Mnangagwa was officially sworn in on August 27 following a ruling by the Constitutional Court declaring Mr. Mnangagwa the winner of the July 30 presidential election. The court dismissed a legal challenge brought by the political opposition, Movement for Democratic Change Alliance. The United States urges all parties to respect the Zimbabwean constitution and the rule of law.

The IRI-NDI Zimbabwe International Electoral Observation Mission reported “several improvements to the electoral process compared to Zimbabwe's past elections, though equally important problems gave rise to deep concerns that the process thus far has not made the mark.” Further reforms are necessary to meet standards Zimbabweans expect and deserve and which reflect regional and international best practices for democratic elections. 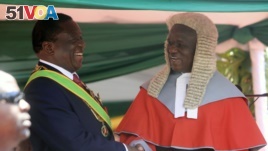 The United States remains concerned over politically motivated human rights violations and abuses, and acts of post-electoral retribution in Zimbabwe.

“Violence and unlawful activity should not be part of the political process, and those responsible for such transgressions must be held accountable,” said State Department spokesperson Heather Nauert. “Human rights and fundamental freedoms, such as freedom of expression and association, must be respected, and victims and witnesses of human rights violations and abuses deserve protection under the law.'

The United States encourages the government of Zimbabwe to hold substantive discussions with all stakeholders and implement electoral and broader political and economic reforms.

The United States stands ready to continue its dialogue with Zimbabwe's political, economic, and civil society leaders to foster inclusive democratic governance for the betterment of all citizens.