Update Required To play the media you will need to either update your browser to a recent version or update your Flash plugin.
By Susan Shand
18 January, 2018


War can be deadly for wildlife, too. A new study reports that war is the biggest threat to Africa's elephants, rhinoceroses, and other animals.

Researchers examined how years of conflict in Africa have affected populations of large animals. More than 70 percent of Africa's protected wildlife areas have been within a war zone at some point in the last 70 years.

The more frequent the fighting, the greater the drop in animal populations, said Josh Daskin, an ecologist at Yale University. He was the lead author of the study, which was published Wednesday in the journal Nature. 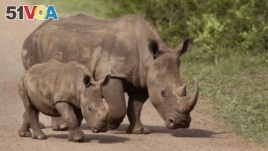 "It takes very little conflict, as much as one conflict in about 20 years, for the average wildlife population to be declining," Daskin said.

Areas with frequent fighting — but not necessarily the bloodiest fighting— lose 35 percent of their large animal populations during each year of war, he said.

Some animals get killed by weapons of war. Yet, many also die because of changes in social and economic conditions in an area as a result of war, said Rob Pringle. He is an ecologist at Princeton University and the study's co-author.

People in and around war zones are poor and hungrier. So they may begin to illegally hunt animals for valuable tusks or hunt protected animals to eat, Pringle said. And during wartime, animal conservation programs do not have as much money or power to protect wildlife.

Most of the time, wildlife populations do survive. Researchers have found only six examples of entire animal populations being destroyed by war. A large group of giraffes in a Uganda park, for example, died out between 1983 and 1995 during two civil wars.

Greg Carr is head of a nonprofit group that works in and around Gorongosa National Park in Mozambique. He said the study's findings are not surprising. He said Gorongosa's wildlife populations fell during the country's civil war. However, that was caused more by poverty than war, Carr said.

"With or without war, poverty is the threat to wildlife in Africa going forward," he said in an email to the Associated Press.

Mozambique's civil war ended in 1992. The war hurt its animal populations. Rebel and government soldiers hunted much of the wildlife in Gorongosa, Daskin said. Species came close to disappearing. But today, Daskin said, wildlife is back to 80 percent of pre-war levels.

"The effect of war on wildlife is bad," Pringle said. "But it's not apocalyptic."

The Associated Press reported this story. Susan Shand adapted the story for Learning English. Ashley Thompson was the editor.

Rhinoceros - n. a large, heavy animal of Africa and Asia that has thick skin and either one or two large horns on its nose

Tusk – n. a very long, large tooth that sticks out of the mouth of an animal

Giraffe - n. a very tall African animal that has an extremely long neck and legs