Update Required To play the media you will need to either update your browser to a recent version or update your Flash plugin.
By Dr. Jill Robbins
17 July 2020


This week, we received a question from Rose in Brazil. She asks, 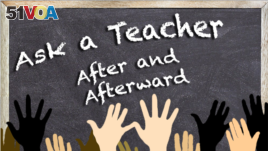 Thanks in advance. -- Rose, Brazil.

You have asked about two words that seem very similar. But they are in fact used differently. "After" has many uses in English: it can be used as an adverb, a conjunction, a preposition or even a noun. First, I will explain how it is used as an adverb.

The adverb "after" means following in time or at a later time. Notice that this can be used in the same way you use the word "later."

She returned from the trip one year after.

It is probably more common to use "after" as a preposition. It means at a time following, as in these sentences:

My brother was born five years after my parents' wedding.
The bus arrives at five minutes after two o'clock.

And after is also used as a conjunction, that is, it joins together two ideas in one sentence.

Don't tell them until after they have had lunch.

Now on to "afterward." "Afterward" is only used as an adverb. It helps describe an action that happens at a later time.

Kai got the job and received a promotion afterward.

You may have seen "afterward" with an "s" at the end. This form is much more common in British English and less formal American English. There is no difference in meaning between afterwards and afterward. You may hear:

Why don't we take her to lunch afterwards?

Both "afterward" and "afterwards" can be used in the same way you would use the word later. But "after" has many more uses than these two forms.

That's Ask a Teacher for this week.

What question do you have about English? Send us an email at learningenglish@voanews.com.

promotion n. the act of moving someone to a higher or more important position or rank in an organization