Bangladesh to Send Rohingya Back to Myanmar

Update Required To play the media you will need to either update your browser to a recent version or update your Flash plugin.
By Bryan Lynn
16 January, 2018


Myanmar and Bangladesh have agreed on a plan to send refugees from Myanmar back to the country within the next two years.

The refugees, Rohingya Muslims, fled across the border last year to escape a military campaign in Rakhine state.

Statements from both countries said the agreement calls for Bangladesh to set up five transit camps on its side of the border. The camps are expected to begin sending refugees to two reception centers in Rakhine state as early as next Tuesday, January 23.

Myanmar said it would build a transit camp that can hold up to 30,000 returnees.

About 650,000 Rohingya have entered Bangladesh since last August. Many now live in overcrowded camps in Bangladesh's Cox's Bazar district. Humanitarian groups say many children there are suffering a number of health problems because of a poor diet and poor living conditions. 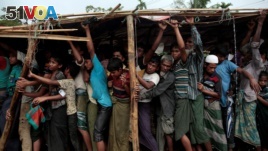 Rohingya refugees jostle as they line up for a blanket distribution under heavy rainfall at the Balukhali camp near Cox's Bazar, Bangladesh, Dec. 11, 2017.

The refugees have told human rights groups they fled to escape numerous attacks carried out by Myanmar security forces. They accuse the security forces of burning down homes and whole villages, raping women and shooting some people for no apparent reason.

The United Nations has described the reported actions as "a textbook case of ethnic cleansing." Myanmar's military has cleared itself of any abuses. The military says it carried out the campaign to answer attacks on police. And the government dismisses the reported abuses, claiming they are overestimated.

Bangladesh said the process would attempt to first return "family units" and children who have lost parents. It would also give preference to "children born out of unwarranted incidence," a term used to describe children born as a result of rape.

Bangladesh's foreign ministry said the agreement showed Myanmar had demonstrated its "commitment to stop (the) outflow of Myanmar residents to Bangladesh."

A spokesman for the U.N. High Commission for Refugees (UNHCR) said the Rohingya should only return voluntarily when they feel it is safe to do so.

"Major challenges have to be overcome," the spokesman said.

Rights group Amnesty International said it believes it is too soon to begin returning refugees. In a statement on Tuesday, the group said the new agreement does not guarantee the safety of refugees once they return to Myanmar.

"The obfuscation and denials of the Myanmar authorities give no reason to hope that the rights of returning Rohingya would be protected, or that the reasons for their original flight no longer exist," the statement said. Amnesty added that "any forcible returns would be a violation of international law."

The Rohingya have been denied citizenship and other rights in Myanmar, a country where Buddhists are the majority population.

Myanmar considers them to be immigrants from Bangladesh. However, many Rohingya families have lived in Myanmar for generations.

The Reuter news agency and VOANews.com reported this story. Bryan Lynn adapted this story for Learning English. George Grow was the editor.

transit – n. the moving of people from one place to another

unwarranted – adj. not necessary or appropriate

challenge – n. a difficult problem; a refusal to accept something as true

textbook – n. a book used in the study of a subject

reception – n. the act of receiving