Update Required To play the media you will need to either update your browser to a recent version or update your Flash plugin.
By Mario Ritter
20 February, 2018


The head of Oxfam says the British aid group is investigating 26 new reports of sexual wrongdoing by its workers.

Mark Goldring spoke before Britain's parliament Tuesday. He answered questions about the behavior of Oxfam workers on the Caribbean island of Haiti.

He said, "I am sorry, we are sorry, for the damage Oxfam has done both to the people of Haiti but also to wider efforts for aid and development by possibly undermining public support."

Goldring said 26 cases have come forward. He said 16 of them were linked to the group's international programs. He also said Oxfam wants people to report abuse wherever and whenever it took place. 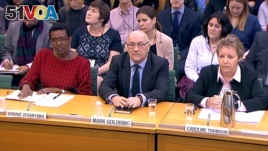 British lawmakers questioned Goldring about accusations against the Oxfam workers. They have been accused of paying Haitians for sex in 2011. Oxfam was involved in aid operations there following a hugely destructive earthquake on the island. At least 100,000 people were killed and even more displaced by the event.

Oxfam released a report on the issue on Monday. It said seven people were accused of paying for sex at a home provided by Oxfam. The report did not release the names of the accused. However, it said three of them had threatened a witness in the investigation.

Four staff members were dismissed for gross misconduct. The Oxfam director in Haiti, Roland Van Hauwermeiren, resigned along with two others.

Oxfam said Friday it would set up an independent commission to study the group's methods and culture.

British lawmakers also questioned officials from Save the Children UK. They voiced concerns that sex criminals were targeting such aid organizations.

Oxfam says it plans to develop a new system for vetting possible workers.

The reports of sexual wrongdoing have caused Britain and the European Union to reconsider support for Oxfam.

Haitian President Jovenel Moise has called for investigations of other charitable organizations on the island.

Oxfam is among the world's biggest aid organizations.

Wayne Lee reported this story for VOA News. Mario Ritter adapted it for VOA Learning English with additional material from AP and Reuters. Caty Weaver was the editor.

undermine –v. to make something weak or less effective in a hidden way

vet –v. to investigate someone to see if they can be approved for a job

charitable –adj. related to charity, giving to the poor, sick or needy

We want to hear from you. Write to us in the Comments section and visit 51VOA.COM.