Airlines Begin New Security Measures for Flights to US

Update Required To play the media you will need to either update your browser to a recent version or update your Flash plugin.
By Phil Dierking
25 October, 2017

The companies are beginning the security interviews at the request of U.S. officials.

The five airlines are Air France, Cathay Pacific, EgyptAir, Emirates and Lufthansa. All five said they plan to carry out the interviews; however, the airlines gave different descriptions of how the passengers are to be questioned.

Some travelers may actually be questioned by an airline employee. But others may be told to answer questions on a form or document. 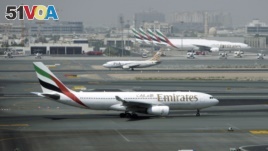 The Associated Press says it was not immediately clear if other airlines would be affected.

In the past, the international travel industry experienced problems after the U.S. government announced steps to improve airline security.

The U.S. Department of Homeland Security has yet to comment on the interviews.

The new policy comes at the end of a 120-day time limit for airlines to meet new U.S. rules after officials lifted a ban on laptop computers on some Middle Eastern airlines.

Germany's Lufthansa Group said the new rules come from the U.S. Transportation Security Administration, which reports to the Department of Homeland Security.

"In addition to the controls of electronic devices already introduced, travelers to the U.S.A. might now also face short interviews at check-in, document check or (their) gate," the company said.

Air France will begin new security interviews on Thursday at Paris Orly Airport and a week later at Charles de Gaulle Airport. The company plans to give a written questionnaire to "100 percent" of the passengers.

Emirates said it will begin doing "pre-screening interviews." Passengers flying out of Dubai are to be questioned at airline check-in areas. The company will conduct interviews at boarding gates for passengers changing airplanes during their travel. It warned people flying through Dubai International Airport, its headquarters, to allow extra time for flights.

"These measures will work in complement with the current additional screening measures conducted at the boarding gate," it said.

EgyptAir said in a statement their new security measures include interviews and more detailed searches of passengers and their belongings. The measures will include searches for illegal agricultural or animal products.

These changes are the latest decision by President Donald Trump's administration to affect international travel.

In March, U.S. officials announced the ban on laptops in passenger areas on flights from 10 Middle East cities. Officials said they were concerned that Islamic State fighters and other extremists could hide bombs inside of the computers.

The ban was later lifted after the airlines began using devices such as CT scanning equipment to inspect electronic devices.

That laptop ban, as well as U.S. travel bans mainly affecting Muslim countries, have created problems for Mideast airlines. Emirates, the largest airline in the area, said it cut 20 percent of its flights to the U.S. in the weeks after the restrictions.

It was not immediately clear if the new rules affect other Mideast airlines.

Abu Dhabi-based Etihad told the Associated Press that its operations "were normal." Qatar Airways has yet to say how the changes have affected its operations.

The Associated Press reported on this story. Phil Dierking adapted the report for VOA Learning English. George Grow was the editor.

What are the security measures for air travel in your country? We want to hear from you. Write to us in the Comments Section or on 51VOA.COM.

check-in - n. the act or process of reporting that you have arrived at a hotel, an airport, etc.

CT scanners - n. A computed tomography scan uses X-rays to make detailed pictures of structures inside of the body.

baggage - n. the bags, suitcases, and personal things that a person carries when traveling

boarding - n. to get into or onto something

gate - n. an area at an airport where passengers arrive and leave

interviews - n. a meeting at which people talk to each other in order to ask questions and get information

pre-screening - n. to examine people or things in order to decide if they are suitable for a particular purpose