Update Required To play the media you will need to either update your browser to a recent version or update your Flash plugin.
By Christopher Jones-Cruise
14 March, 2016


A militant group linked to al-Qaida terrorists said it attacked a vacation area in Ivory Coast on Sunday.

SITE Intelligence is an organization that examines terrorist websites. It reported that an anti-government group in Algeria -- called al-Qaida in the Islamic Maghreb, or AQIM -- said its members carried out the attack. 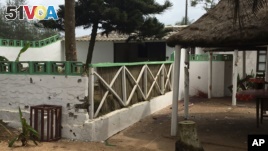 Jean-Baptiste Beugré works at a hotel next to the attack area. He says he saw a gunman arrive. The attacker wore military clothing and carried a military weapon. He says the attacker shot people, including children and women.

Witnesses said the gunmen looked young and carried many weapons.

Marcel Gueï survived the attack. He said an attacker asked a man if he was going to a mosque, or Muslim religious center. The man said he was, and the gunman did not shoot him.

When the gunman asked another man if he attended a mosque, the man said he did not. The gunman shot and killed him.

Witnesses said militants walked to the beach of one of the three hotels that was attacked, called the Southern Star. The hotel was reportedly filled with people from other countries.

The attack is the third deadly shooting in the past few months in West Africa. In November, gunmen attacked a hotel in Mali. In January, armed men attacked a hotel and a restaurant in Burkina Faso. Al-Qaida in the Islamic Maghreb has also claimed responsibility for those attacks.

Emilie Iob in Ivory Coast reported on this story for VOANews. Christopher Jones-Cruise adapted her report for Learning English. Kathleen Struck was the editor.

vacation - n. a period of time that a person spends away from home, usually to rest or for travel

coward - n. someone who is too frightened to do what is right

beach - n. a sand- or rock-covered area that is next to an ocean or lake