Update Required To play the media you will need to either update your browser to a recent version or update your Flash plugin.
By Ashley Thompson
16 May, 2019


A California company and a British-based group are sharing a $10 million award for developing programs to help children teach themselves how to read.

The two winners are the Kitkit School, based in Berkeley, California, and the educational nonprofit organization onebillion of London.

Nearly 200 teams from 40 countries entered the competition. They sought to become the latest winner of an XPRIZE. Money for the international award comes from inventors, billionaires and philanthropists. Their aim is to make the world a better place through technology.

Businessman Elon Musk announced the two winners at a ceremony Wednesday night in Los Angeles, California. The event recognized and honored all five of the finalists. The XPRIZE For Global Learning was worth $15 million, with the money coming from Musk. Each finalist received $1 million. The two winners each received an additional $5 million.

The goal of the competition was to develop an open-source software program, which was put on computer tablets donated by Google. Then the devices were given to thousands of children in 170 villages in Tanzania for testing. 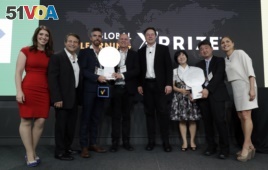 The five finalists spent 15 months improving the software. They had to develop programs filled with games that would interest children and hold their attention. The programs used pictures, letters, numbers and sounds to help the users teach themselves to read, write and do simple mathematics.

The games would show children letters and pictures, let them write over letters to learn how to write, and even read books to them.

When testing began, XPRIZE officials said only two percent of the children could read a simple sentence in Swahili, their native language. Three-fourths of the boys and girls had never attended school. Many had to be shown how to power up the device. But 15 months later, 30 percent of the children had gained basic reading skills.

Both winning teams said the hardest part was developing software at their home bases, putting it on tablets and hoping the children would understand how to use it.

"We had to learn fast and work closely with partners who were in East Africa," said Sooinn Lee, who co-founded Enuma Inc. The company operates Team Kitkit School.

"It often felt like driving in the dark," Lee added.

Yet all five finalists developed operational, open-source software, which will be put on the internet for anyone to use. Judges decided that the two winners did the best when it came to producing results.

The success among the finalists likely came as a surprise to critics. Some people wondered whether the goal could be reached when the XPRIZE Foundation announced the competition five years ago.

"All our experts said, ‘Are you sure about this,'" remembered Emily Musil Church. She is chief of prize operations for XPRIZE.

The winners of the prize Wednesday night will now get to work making their software available to as many people as possible.

Lee said Kitkit's efforts will include making a version of its software for smartphones, which are widely used in many developing countries. And, onebillion wants to offer its software in a number of languages to reach as many people as possible.

Judith Hermetter is onebillion's chief of communications. She said the software will mean a lot to users around the world.

"This will be transformational for them, their communities and their countries."

philanthropist - n. a wealthy person who gives money and time to help make life better for other people

tablet - n. a flat, rectangular computing device that is used for connecting to the Internet, watching videos, reading books, etc.

transformational - adj. relating to a complete or major change in someone's or something's appearance, form, etc.