James Madison: Not Your Everyday Politician

Update Required To play the media you will need to either update your browser to a recent version or update your Flash plugin.
By Kelly Jean Kelly
12 March, 2017

James Madison was elected in 1808. He was a capable president who served two terms. But most Americans do not remember Madison for his presidency. They remember him for work he did earlier.

After the Revolutionary War, in which the American colonists separated from Britain, Madison proposed that the new United States form a stronger national government.">


After the Revolutionary War, in which the American colonists separated from Britain, Madison proposed that the new United States form a stronger national government.

Madison’s vision for a three-part government – with an executive, a legislature, and an independent Supreme Court – became the basis for the Constitution we still use today.

Madison went on to persuade voters to accept the proposed Constitution. He explained how a system of checks and balances would prevent any one part of government from becoming too powerful. 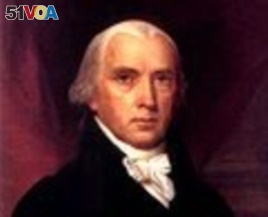 And, when voters demanded more protection for individual liberties, Madison wrote the amendments that became the Bill of Rights.

These actions earned Madison the name “Father of the Constitution.”

Madison did not have the appearance of most politicians. He was a short man with a soft voice who had been sick often as a child.

He grew up in a wealthy family in Virginia. He liked to read books, and to study. He went to college at the school that later became Princeton University in New Jersey.

When the Revolutionary War started, Madison’s intelligence and knowledge – as well as family money – helped him participate in debates about independence.

Madison also held positions in the new American government he helped create, including as secretary of state under President Thomas Jefferson.

Madison did not have much of a personal life. Many people were surprised when he married a young widow named Dolley Payne Todd. She was 26; he was 43. The couple did not have children, but they raised Mrs. Madison’s surviving son together.">


Madison did not have much of a personal life. Many people were surprised when he married a young widow named Dolley Payne Todd. She was 26; he was 43. The couple did not have children, but they raised Mrs. Madison’s surviving son together.

Stories suggest the two were very happy, although they had different personalities. Dolley Madison was energetic, warm, and social. She loved to throw parties – and her guests loved to attend them.

Historian Catherine Allgor notes Dolley Madison often dressed dramatically – including wearing turbans covered with peacock feathers. Her weekly gatherings at the president’s house were so crowded that they became known as “squeezes.”

As first lady, Dolley Madison did not follow her husband’s idea of a strict separation of powers. She invited officials from all parts of the government to her parties, as well as people from opposing political groups.

Allgor says Dolley Madison succeeded in making the president’s house a symbol of unity and glamor. She remains one of the best- known and most-loved first ladies in U.S. history.

But his wife’s popularity could not prevent Madison from facing a difficult presidency.

Conflict abroad and at home

During his first term, the U.S. faced increasingly tense relations with Britain. Madison accused the British of interfering with international trade and seizing American sailors.

At the same time, European-American settlers blamed the British for helping native tribes fight against them. But, the settlers had violated treaties between the U.S. government and the Native Americans. In 1811, native warriors attacked U.S. soldiers at the Battle of Tippecanoe in today’s state of Indiana. A U.S. general named William Henry Harrison led his troops to fight back. The result was not clear, but Harrison declared victory.

For most of the war, American forces failed.

But in 1813, they had two notable victories in Canada. They captured and burned the city of York, in Toronto. 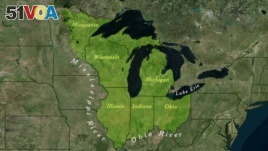 During the War of 1812, Native American tribes lost sovereignty of their lands across the "Old Northwest," eventually leading to removals of Indian communities to reservations west of the Mississippi.

And General Harrison had another major fight with native warriors at the Battle of the Thames. The Native Americans were defeated. The leader of the tribal alliance, Tecumseh, died from the wounds he received there.

That loss ended, for the most part, the efforts of eastern Native American tribes to push back white settlers.

Madison had already left the president’s house to meet with generals in the field. Dolley Madison remained. But when she learned the British were approaching quickly, she acted. She famously ordered her servants, as well as a 15-year-old house slave named Paul Jennings, to take down a painting of George Washington. The servants, slaves, first lady, and painting all escaped to safety.

A view from the Potomac River of Washington, D.C. under attack by British forces under Major General Ross, August 24, 1814.

Commanders of the British force took a group of men to the Capitol building and set it on fire. Then, they went to the president’s house. They found the table set for dinner. The British commanders stopped to toast the president before they burned his home.

By the time Washington, D.C. burned, American and British officials were already in peace talks.

But in the U.S., one more major battle was being fought. A militia general named Andrew Jackson led a ragtag army against a British attack in New Orleans, Louisiana. The Americans’ rain of bullets and shells was so deadly that only one British soldier reached the top of the American defenses.

When the British finally withdrew, they left behind more than 2,000 dead and wounded. Five hundred other British soldiers had been captured.

The Battle of New Orleans was considered a great victory for the U.S; however, it was not necessary. The war had ended, by treaty, two weeks earlier.

The War of 1812 almost bankrupted the U.S. government and cost the lives of tens of thousands of soldiers. It was devastating for many Native Americans. It did provide a chance for several thousand slaves to escape to freedom by serving in the British military. But it did nothing to improve the lives of most of 1 million enslaved people in the U.S. at the time.

Despite all this, the war united most of the country.

The song that would become the country’s national anthem, “The Star-Bangled Banner,” was written during the War of 1812.

Madison benefited from most people’s belief that the war was a success. The end of his second term began what historians call the “Era of Good Feelings.” Madison left the presidency more popular than when he had started it.

After he retired, Madison lived on his Virginia estate for nearly another 20 years. He died in his bed at age 85. A niece was in the room. She says that a strange look passed her uncle’s face. She asked him what was wrong."

After he retired, Madison lived on his Virginia estate for nearly another 20 years. He died in his bed at age 85. A niece was in the room. She says that a strange look passed her uncle’s face. She asked him what was wrong.

Madison’s last words were: “Nothing more than a change of mind, my dear. I always talk better lying down.”

See how well you understand the story of James Madison by taking this listening quiz. Play each video, then choose the best answer.

capable - adj. skilled at doing something or able to do something well

participate - v. to be involved with others in doing something

turban - n. a head covering made of a long cloth wrapped around the head

feather - n. any one of the light growths that make up the outer covering of the body of a bird

approach - v. to move or become near or nearer to something or someone

toast - v. to drink and say or agree to words that honor someone or express good wishes

ragtag - adj. made up of different people or things and not organized or put together well