Update Required To play the media you will need to either update your browser to a recent version or update your Flash plugin.
By John Russell
22 August, 2017


President Jose Eduardo dos Santos is the only leader that the majority of the 22 million people who live in Angola have ever known. He will soon leave office after 38 years in power.

Many Angolans are preparing to vote for the first time. Almost all of those who have marked ballots in the past have never seen one without Santos' name on it.

Ana Maria Espirito Santos Monteiro is 60 years old. She has never voted because she did not believe there was a reason to do so. That is because dos Santos has often been accused of rigging elections.

Monteiro told VOA that she is going to vote for the first time Wednesday because she does not believe rigging will be widespread in the next election. She says she hopes it will be transparent and fair. 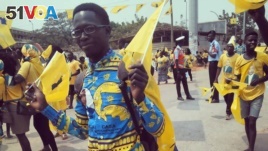 Opposition voters from Angola's CASA-CE party gather in the capital, Luanda, ahead of the nation's historic poll: the first in decades without longtime President Jose Eduardo dos Santos on the ballot. (A. Powell/VOA)

Monteiro supports the CASA-CE opposition party. It was formed in 2012 and controls eight seats in parliament.

CASA-CE faces strong competition from the MPLA, which has ruled the country since 1975. The party has nominated foreign minister Joao Lourenco to be Dos Santos' successor.

But many younger voters are unhappy with the MPLA. They blame the party for the country's economic inequality.

Louis Gabriel is a 27-year-old student. He said he cannot find a job.

"I think this year will be different because Dos Santos is not running," he said.

But not all first-time voters want change. Gaspar Domingos said he is staying with the MPLA.

"I am very expectant because I believe that the MPLA is the big family, is the first community," he said.

Critics of Dos Santos do not think there will be much change. They say the ruling party has intimidated voters.

Rafael Marques is a reporter and critic of Dos Santos. He believes Angolans already know what the results of the election will be.

"The question is whether the MPLA will try to understand how disaffected, how unhappy the population is and give more space to the opposition," he said.

Opposition leaders are hopeful, but polls predict an MPLA win.

rig – v. to control or affect (something, such as a game or election) in a dishonest way in order to get a desired result

successor – n. a person who has a job, position or title after someone else; someone who succeeds another person

disaffected – adj. no longer happy and willing to support a leader, government, etc.