Update Required To play the media you will need to either update your browser to a recent version or update your Flash plugin.
By Bryan Lynn
14 June 2021

The results, announced Monday, were based on late-stage trials involving nearly 30,000 volunteers in the United States and Mexico.

Novavax said the two-shot vaccine was about 90 percent effective and data showed it was safe. The company says it plans to seek emergency approval for the vaccine in the U.S., Europe and elsewhere by the end of September.

It estimates it would then be able to start producing up to 100 million injections a month. The company says it aims to supply 110 million doses to the U.S. over the next year and a total of 1.1 billion doses to developing countries.

The vaccine -- which is easy to store and transport -- is expected to play an important part in increasing the availability of shots in the developing world. 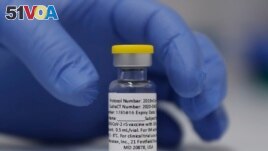 In this Wednesday, Oct. 7, 2020, file photo, a vial of the Phase 3 Novavax coronavirus vaccine is seen ready for use in the trial at St. George's University hospital in London. (AP Photo/Alastair Grant, File)

"Many of our first doses will go to ... low- and middle-income countries, and that was the goal to begin with," Novavax Chief Executive Stanley Erck told The Associated Press.

While more than half of the U.S. population has had at least one vaccine injection, less than 1 percent of people in the developing world have had one shot, researcher Our World In Data reports.

The Pfizer, Moderna and Johnson & Johnson vaccines have already been approved for emergency use in the U.S. and Europe. Europe also uses a vaccine developed by AstraZeneca.

Novavax's study involved nearly 30,000 people ages 18 and up. Two-thirds of subjects received two injections of the vaccine, three weeks apart, with the rest receiving an inactive substance or placebo.

There were 77 cases of COVID-19 -- 14 in the group that got the vaccine and the rest in volunteers who received the placebo. None of the people in the vaccine group experienced moderate or severe disease.

The vaccine was similarly effective against several variants. One of the variants first appeared in Britain and is also found in the U.S. It has especially been affecting high-risk populations, including older people and those with other health problems.

Only minor side effects were reported in people taking part in the study, such as head and muscle aches, tiredness and pain at the injection site. The company said there were no reports of unusual blood clots or heart problems.

Novavax reported its results in a news release. It said it plans to publish the findings in a medical publication to be examined by independent experts.