Update Required To play the media you will need to either update your browser to a recent version or update your Flash plugin.
By Bryan Lynn
15 April 2020


Apple and Google have teamed up to launch a mobile phone tool to follow the contacts of people infected with coronavirus.

The technology is a form of "contact tracing," a method used to identify people who may have had contact with infected individuals in an attempt to prevent additional spread of disease.

Health officials say the method is an effective way to help slow the spread of highly contagious viruses. 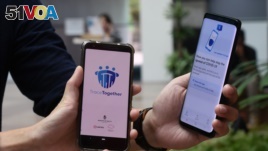 The current coronavirus, which is affecting much of the world, causes the disease COVID-19. Many carriers of the virus do not know they have it because they have no immediate signs of illness. They could be spreading the virus unknowingly. Contact tracing is a way to identify others who may have been infected.

The two companies say Bluetooth wireless technology will permit devices near each other to exchange information. A record of the Bluetooth signals between devices would be created.

If a device user becomes infected with the virus and agrees to share that information, the record could be used to inform other people that the user could have infected.

Apple and Google say they first plan to release app versions of the technology for Android and Apple devices by mid-May. Over the next several months, they plan to build the tracking technology directly into the device operating systems.

Numerous technology companies and organizations have been seeking to develop tools to help fight COVID-19. Some of the existing tools use data from mobile devices to measure and record population movements.

Health and government officials have called for such technology to help fight the current crisis. Government-backed apps have already been launched in some countries, including Singapore, South Korea, India and China. The technology is also being developed in Britain, Germany and Italy.

Israel's Health Ministry released a contact-tracing app in late March. The app came after the Israeli government confirmed that the country's security service had started collecting data from citizens' phones to trace the movements of virus patients.

In a joint statement, Apple and Google said "there has never been a more important moment to work together to solve one of the world's most pressing problems."

The companies also said they would be cooperating with developers, governments and public health providers to use the power of technology "to help countries around the world slow the spread of COVID-19 and accelerate the return of everyday life."

Major technology companies – including Google and Facebook - have been criticized in recent years for not protecting user privacy. In some cases, companies have been accused of secretly selling user data. In the past, Apple chief Tim Cook has criticized Facebook and Google for putting profits ahead of user privacy.

In announcing the new system, Apple and Google said its developers had built in "strong protections around user privacy."

The companies said the technology would not identify personal information or record user movements. It is designed to only capture data about when users' phones have been near each other. Data will not be kept on company servers, Apple and Google added.

The two companies also said they would "openly publish information" about their work for others to examine.

Pam Dixon is director of the not-for-profit World Privacy Forum. She told The Associated Press that after discussing the new system with a top Apple official, she is convinced that people's privacy will be protected.

"I think they've taken care of some of the really big problems," she said. Dixon noted that the companies said they are able to turn off the system when it is no longer needed. "The government is not going to have identity information of those testing positive."

The American Civil Liberties Union, or ACLU, said in a statement that the technology would only be effective if those using the system trust the companies to protect their privacy. It added that many members of society are likely to be left out of such systems because they lack access to technology to use them.

However, the ACLU noted that the Apple-Google technology "appears to mitigate the worst privacy and centralization risks."

But the statement added, "There is still room for improvement."

Bryan Lynn wrote this story for VOA Learning English, based on reports from The Associated Press, Reuters, Agence France-Presse and online sources. Ashley Thompson was the editor.

team up – v. to join in cooperation to work together on something

trace – v. to find the origin of something

contagious – adj. having a sickness that can be passed on to someone else

app – n. a program for a smartphone or other device that performs a special function

convince – v. to make someone believe something is true

society – n. a large group of people who live in the same souncty or area and have the same laws, traditions, etc.

mitigate – v. to reduce the harmful effects of something