Update Required To play the media you will need to either update your browser to a recent version or update your Flash plugin.
By Bryan Lynn
24 June 2020


Apple says it will start using the same chip technology it uses in its mobile devices to power the next generation of Mac computers.

The new technology will replace Intel-based chips, which have been built into Mac machines for the past 15 years.

Chips help power a computer's processing system. One of the main materials used to make computer chips is silicon, a chemical element.

In its announcement this week, the company said its first Mac to include the new "Apple Silicon" chips would be available by the end of 2020.

The news came during Apple's yearly conference for computer programmers and mobile app developers. This year, the conference was held online because of the coronavirus crisis.

Apple chief Tim Cook told people watching the conference that the decision marked a historic new beginning for the Mac. "Silicon is at the heart of our hardware," he said. "Having a world-class silicon design team is a game changer."

The company already uses Apple-designed chips in its iPhone and iPad devices. The same kind of chips are also used to power most smartphones in use throughout the world.

Apple says the decision to move away from Intel chips is designed to make Mac computers faster and more efficient while requiring less power.

Johny Srouji is Apple's vice president for hardware technology. He explained the change to the conference. "The first thing this will do is give the Mac a whole new level of performance," he said. 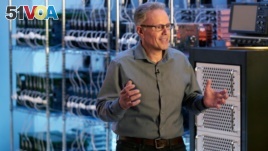 Johny Srouji, Apple's vice president for hardware technology, discusses the company's plans to switch to its own chips to power its Mac computers. (Apple)

Srouji said the company will draw on its experience designing "the world's most energy efficient chips" that currently power Apple's mobile devices.

"It all started with the iPhone," Srouji said. "The iPhone demanded performance and capabilities that were seen as impossible in a device that small."

The change will also "establish a common architecture across all Apple products," the company said in a statement. That means the new Macs will be able to run apps that currently work only on iPhones or iPads.

Apple said the new system should be in all Macs within two years.

In a statement, Intel said it still planned to keep its relationship with Apple "across several areas of business." Experts told the Reuters news agency this could include Intel continuing to supply Apple with data center chips to power its iCloud service.

The new Apple chips are based on technology developed by Arm Holdings, a semiconductor and software design company owned by Japan's Softbank Group.

On the same day as Apple's conference, a machine that uses Arm technology was named the world's fastest supercomputer. The Fugaku supercomputer was developed by Japanese research organization RIKEN and Japan's Fujitsu Ltd.

The Fugaku system was at the top on the TOP500 list, a ranking that comes out two times a year of the world's most powerful computers. Arm Holdings announced the latest list on Monday.

Before that, the top-ranked supercomputer on the list was a machine based at Oak Ridge National Laboratory in the United States. That system runs on chips designed by American technology company IBM.

Chips from IBM and Intel were used in all other systems in the top 10, except for a system using a Chinese-designed chip from China's National Supercomputing Center in the city of Wuxi.

One use of supercomputers by governments is to simulate nuclear explosions in weapons tests. They are also used to model climate systems and in biotechnology research. The Fugaku supercomputer will be used for such projects in Japan.

Bryan Lynn wrote this story for VOA Learning English, based on reports from The Associated Press, Reuters, Apple and online sources. Ashley Thompson was the editor.

app – n. a program for a smartphone or other device that performs a special function

capability – n. the ability of power to do something

draw on – phrasal verb. to use information, knowledge or experience to help achieve something

architecture – n. a set of rules that form the structure and logical organization of a computer or computer-based system

convert – v. to change the appearance, for or purpose of something

ranking – n. a position in a list that shows things or people of importance

simulate – v. to recreate a process or situation