Update Required To play the media you will need to either update your browser to a recent version or update your Flash plugin.
By Bruce Alpert
13 September, 2017


Aung San Suu Kyi, the leader of Myanmar's government, has cancelled her planned visit to the United Nations General Assembly.

Several nations have criticized the Myanmar military recently for deadly attacks against minority Rohingya Muslims in the country, also known as Burma. The UN General Assembly is meeting next week in New York City.

The UN says almost 380,000 Rohingya have fled to Bangladesh.

Aung San Suu Kyi won the Nobel Peace Prize in 1991 for leading the nonviolent struggle for democracy and human rights in Myanmar. She spent more than 20 years under house arrest because of her democracy effort.

But she is facing sharp criticism for her response to the violence against Rohingya in the country. She has denied reports of genocide and defended the military actions as justified. The criticism has even come from other Nobel Peace Prize winners. 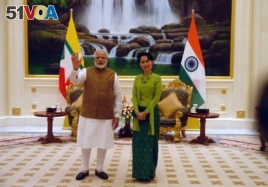 Retired South African Archbishop Desmond Tutu of South Africa wrote an open letter to Aung San Suu Kyi. Part of it said, "If the political price of your ascension to the highest office in Myanmar is your silence, the price is surely too steep."

Myanmar government spokesman Zaw Htay said that Aung San Suu Kyi will miss the General Assembly meeting to deal with security issues in Rakhine state. He also said there had been reports of the possibility of terror attacks in the country.

Aung San Suu Kyi is the head of Myanmar's government and its foreign minister. Myanmar's president is Htin Kyaw.

On August 25, a group of Rohingya militants attacked about 30 police offices and army positions in Rakhine, killing several people. The militants said they were trying to protect their ethnic minority from government persecution.

About 400 people have been killed in battles between the military and the militants.

The Trump administration has called for protection of civilians.

The Bangladesh government has said that all the refugees will have to return to Myanmar. It has called for safe areas in Myanmar. But Zaw Htay said that would not be acceptable to Myanmar's government.

Philippe Bolopion is deputy director of global advocacy at Human Rights Watch. He said the humanitarian crisis is worsened by Myanmar's refusal to permit aid agencies to come in and provide help.

But Zaw Htay said the Myanmar government is working to stop the violence and deal with threats of future terrorist attacks.

Jean Leiby of the United Nations Children's Fund (UNICEF) says Rohingya camps in Bangladesh are crowded with children. He said about 200,000 children may be at risk of disease and are in urgent need of support.

A second flight, donated by the United Arab Emirates, has also landed in Bangladesh, carrying about 2,000 family tents.

The Rohingya are one of Myanmar's many ethnic minorities in the Buddhist-majority nation. They have been denied citizenship, though most can show that their families have been in the country for many years.

Margaret Besheer and Lisa Schlein reported on this story for VOANews. Bruce Alpert adapted this story for Learning English. Caty Weaver was the editor.

ascension - n. the act of rising or ascending

persecution - n. to treat someone cruelly or unfairly especially because of race or religious or political beliefs