As Some US College Students Party, Others Report Them

Update Required To play the media you will need to either update your browser to a recent version or update your Flash plugin.
By Ashley Thompson
21 September 2020


Some college students in the United States are doing something that was once unheard of—reporting other students who attend parties.

Many schools are barring parties and some other social gatherings in an effort to slow the spread of COVID-19. They are also requiring social distancing and face masks, among other rules. 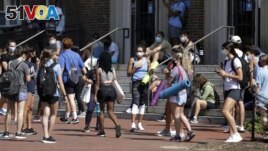 University of North Carolina students wait outside of Woolen Gym on the Chapel Hill, N.C., campus as they wait to enter for a fitness class Monday, Aug. 17, 2020. (Julia Wall/The News & Observer via AP).

At the University of Missouri, one senior-year student is publishing pictures and videos on a "University of Misery" Twitter account. The images show students gathered in large groups at swimming pools, outside bars and other places. Most of the students are seen without masks.

The university has a form on its website where violations of the school's COVID-19 rules can be anonymously reported. But the University of Missouri senior says that publishing such information on Twitter "adds a different level of accountability."

Christian Basi is a spokesman for the university, which is in the city of Columbia and has about 30,000 students. He said students have been good about following rules during the day when they are on campus. But, problems happen once students leave campus.

"Where we're seeing our issues have been off campus, when individuals go home to their private residences," Basi said.

On Tuesday, the University of Missouri said in a statement that it had expelled two students and suspended three others. The actions were taken following violations of the school's coronavirus-related rules.

Some schools, like the University of Miami, in Florida, are paying students to enforce COVID-19 rules.

At that school, 75 "public health ambassadors" are making $10 an hour to walk around campus and make sure people are wearing masks and social distancing. Reports of serious rule-breaking can be sent to university administrators.

Austin Pert is one of the public health ambassadors. The senior student said people generally follow his orders. But Pert noted the program has its limits. Most violations do not take place during the day on university grounds.

"If people want to flout the rules and put social distancing aside for a night to go party, it's not happening on campus," Pert said.

Critics say having in-person learning during a pandemic was a mistake.

Ryan Craig is a higher education advisor and businessman. He said it was foolish to think that college students would follow social distancing and masking requirements.

"These are college students," Craig added. "They are going to do what they want to do."

At Northeastern University in Boston, Massachusetts, administrators saw an Instagram poll last month. It found that more than 100 incoming freshmen said they planned to party.

The student running the account voluntarily gave administrators the identities of the poll-takers. Those students then received a letter warning that partying could result in punishment up to expulsion, a university spokeswoman said.

Nearby Boston University has received about 125 anonymous reports of violations.

Ed Kellermann, a Boston University senior, said he would anonymously report a party if he heard about one. He called it a matter of "life or death" for Boston locals who live near campus.

Kellermann said, "No one wants to get sent home."

mask –n. a covering for the nose and mouth that is meant to prevent the spread of germs

senior –n. a person who is in their final year of high school or college

campus –n. the land around a school, business or similar organization

flout —v. to break or ignore a rule or law without trying to hide it