As the Pandemic Eases, the Weddings Industry Booms

Update Required To play the media you will need to either update your browser to a recent version or update your Flash plugin.
By Susan Shand
10 June 2021


Planning a wedding is never easy.

Now, men and women racing to marry after vaccination in the U.S. face a shortage of flowers, special clothing and food, and venues to hold their weddings.

As the pandemic eases and restrictions are lifted, wedding planners and service providers say they have started pushing their appointments into late 2022 and early 2023.

Anna Noriega owns a wedding planning business in Miami, Florida. She said that both vaccinations and easy COVID-19 testing have permitted weddings to be held with a lot of guests. That has led to more demand for her business than ever.

"We've run out of trucks for some dates this year and that hasn't happened before," said Ben Goldberg. He is the co-founder and president of the New York Food Truck Association.

He provides food for weddings. People want "to have the weddings they had to put off during COVID," he added.

Adding to the rush, some got married quietly, without a celebration, during the pandemic. Now, they want to have a large, costly event.

Namisha Balagopal of Emeryville, California became engaged to Suhaas Prasad in 2019. They had planned a traditional South Asian wedding for 320 guests with events over five days. That could not happen under pandemic restrictions so they married quietly with just a few family members.

The 27-year-old bride is planning a big wedding celebration for August 15 in Park City, Utah. "It's just a really big part of our culture," she said of the wedding. "In the end, it was really important to our parents." 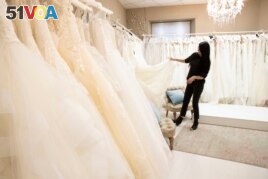 FILE - Anita Galafate checks wedding dresses in a shop in Rome, Tuesday, March 9, 2021. Couples in the U.S. are racing to the altar amid a vaccination-era wedding boom that has venues and other vendors in high demand. (AP Photo/Alessandra Tarantino, File

There is also increased demand for special wedding clothing for the bride, often called a bridal dress.

David's Bridal has 282 stores in the U.S. and more in the UK, Canada and Mexico. The company has 300,000 dresses in its stores because of all the wedding cancellations or delays from last year.

Maggie Lord is a vice president at David's. "It's going to be an unprecedented wedding season this year," she said.

Wedding ceremonies in the U.S. are usually held on weekends. But Lord said people are "having Thursday night ceremonies or Friday afternoon ceremonies just because of the amount of people getting married this year."

"Ninety percent of brides this year are looking to have their weddings at outdoor venues," Lord said because there are fewer restrictions.

Justin Warshaw runs the large international bridal dress company Justin Alexandre Group. He has seen wedding dress requests increase by 593 percent from the same period last spring. "People want to celebrate with family and friends, and get on with their lives," he said.

Competition for places to hold a wedding and other services have caused prices to rise in some areas.

Anna Price Olson works for Bride magazine. She said businesses that provide food and flowers for weddings are often small ones. They have to hire more people to meet demand and pay more for goods like flowers. "In order to do so, in many cases, they're having to charge more," Olson said.

Tirusha Dave is the owner Bravura Brides, the company used by Balagopal to plan her celebration. Dave said she managed three weddings in 2020. So far, she already has 11 weddings planned for this year with 250 to 300 guests invited to each one.

"I think everybody's ready for things to bounce back, but just in a safe way," she said.

wedding - n. a ceremony at which two people are married to each other

bride - n. a woman who has just married or is about to be married

bounce (back) - v. to return quickly to a normal condition after a difficult situation or event