AstraZeneca: US Data Shows Vaccine Effective for All Ages

Update Required To play the media you will need to either update your browser to a recent version or update your Flash plugin.
By Susan Shand
22 March 2021

The results came from the long-awaited study in the United States.

The U.S. study included more than 30,000 people. About 20,000 were given two shots of the vaccine. The shots were injected four weeks apart. The rest received shots of inactive substance called placebos.

AstraZeneca said its experts did not find any safety concerns. They also found no increased risk of unusual blood system blockages, or blood clots, that was a cause for concern in Europe.

"These findings reconfirm previous results observed," said Ann Falsey. She is with the University of Rochester School of Medicine and helped lead the study.

"It's exciting to see similar efficacy results in people over 65 for the first time," she said.

Full information about the study, however, has not been published. And no outside experts have reviewed the information.

The British-Swiss company said Monday that it will seek emergency use permission in the U.S. 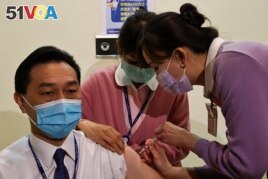 A medical worker receives a dose of the AstraZeneca vaccine against the coronavirus disease (COVID-19) during a vaccination for medical workers in Taiwan, China, March 22, 2021. REUTERS/Ann Wang

‘Vaccine for the world'

AstraZeneca's coronavirus vaccine has been approved for emergency use in more than 50 countries.

When it was approved for emergency use in Britain last December, the shot was described as the "vaccine for the world." It costs much less than vaccines from Pfizer and Moderna. It also does not require extreme cold storage, making it easier to use in countries with limited resources.

The AstraZeneca vaccine is a large part of the United Nations COVAX program. The program aims to get COVID-19 vaccines to poorer countries.

Dr. Paul Hunter is a professor of medicine at the University of East Anglia. He said that more information was needed to confirm AstraZeneca's claim that the vaccine can stop severe disease and hospitalization. He added, however, that the results appeared hopeful.

"This should add confidence that the vaccine is doing what it is most needed for," said Hunter, who was not connected to the study.

Last September, AstraZeneca vaccine drug trials were temporarily suspended in both Britain and the U.S. The company said a woman in the study had developed inflammation in her spine. This led to a delay in the U.S. drug trial.

The drug-maker was slow to report manufacturing problems last October. The company and its partner, Britain's University of Oxford, then reported unclear results from two different vaccine treatments in the British drug trial, which left many uncertain if it was safe and effective.

Last week, more than 12 countries, mostly in Europe, stopped using the vaccine after reports it was linked to unusual blood clots. On Thursday, the European Medicines Agency said its investigation found the vaccine did not raise the risk of blood clots, other than very rare cases.

AstraZeneca said it would continue to examine the new information from the U.S. study before giving it to the FDA in the coming weeks. It said the study and its results will soon be published.

previous – adj. : existing or happening before the present time

excite – v. to cause feelings of enthusiasm in (someone)