Update Required To play the media you will need to either update your browser to a recent version or update your Flash plugin.
By Hai Do
16 July 2020


It was late in Wednesday afternoon when Twitter accounts of several famous people in America all asked followers to "give back to the community."

The message from Tesla founder Elon Musk's Twitter account said, "You send $1,000, I send back $2,000. Only doing this for the next 30 minutes." The message provided a link of letters and numbers for followers to donate their bitcoins. Bitcoin is a form of digital money not supported by any government but exchanged by many people online. 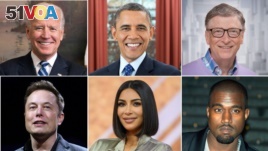 The twitter accounts of Joe Biden, Barack Obama, Bill Gates, Elon Musk, Kayne West and Kim Kardashian were among several that were hacked on July 15, 2020.

Soon the Twitter accounts of Microsoft's Bill Gates, Amazon's Jeff Bezos, and company accounts for Apple joined the appeal. Former U.S. President Barack Obama and Joe Biden, the Democratic presidential candidate, also joined in. Billionaires Michael Bloomberg and Warren Buffett wanted people on Twitter to do the same. Entertainers Kayne West and Kim Kardashian and boxer Floyd Mayweather all asked their followers to "give back."

Over $100,000 in bitcoins were sent to the appeal before Twitter could disable the accounts and removed the posts. The social media company said it was a "coordinated social engineering attack." It said someone targeted "some of our employees with access to internal systems and tools" to take control of the accounts.

Jack Dorsey, the company's founder, called it a "tough day for us at Twitter." But the attack was not the first incident of this kind at the social media company.

In 2017, President Donald Trump's account disappeared from the pages of his millions of followers. The company brought it back online after 11 minutes. An investigation found it was removed by a Twitter employee on his last day of work.

Cybersecurity experts warn that attacks on accounts with millions of followers could have serious effects around the world.

Michael Gazeley is managing director of the internet security company Network Box. He told the Associated Press, "If you receive a tweet from a verified account, belonging to a well-known and therefore trusted person, you can no longer assume it's really from them."

Twitter says its verified accounts are proven to be real by the company.

U.S. Senator Ed Markey has another worry. He said in a statement: "...imagine if these bad actors had a different intent to use powerful voices to spread disinformation to potentially interfere with our elections, disrupt the stock market, or upset our international relations."

Senator Josh Hawley noted that millions of users depended on Twitter not just to send tweets but also to communicate privately by direct messaging. He called on Twitter to work with the Department of Justice and the Federal Bureau of Investigation, or FBI, to secure the site.

"A successful attack on your system's servers represents a threat to all of your users' privacy and data security," said Hawley.

The Reuters news agency reported Thursday that the FBI is now investigating the attack.

Hai Do wrote this report for VOA Learning English with additional information from the associated Press and Reuters. Mario Ritter, Jr. was the editor.

coordinated –adj. acting together in an organized way with others

verified –adj. proven to be correct or true

assume - v. to think that something is true

intent - n. an aim or purpose